Disha Patani’s Boyfriend Tiger Shroff’s Mother Ayesha Showers Love On One Of Her Hidden Talents; Can You Guess What It Is?

Disha Patni who is usually known for her dance, acting, and fitness skills, has now shocked her fans by showing her sketching talent as well. Disha’s fans already knew that she is an extreme anime lover, but now she has proved that by showing her art on Social Media. Disha shared a picture of sketch of a character from ‘Tokyo Revengers’.

She added a caption which read, “when you are stuck at home kinda hobby, hoping to get better at it”.After a few seconds of posting, surprisingly the first comment was posted by her rumoured boyfriend Tiger Shroff’s mother Ayesha Shroff. Commenting on the photo, she wrote, “Get well soooooon deeeeeshu”. Along with celebs, Disha’s fans also joined the track of the comment section. One user said “You are so talented mam”, while the other one said, “you have a scope of improvement you can do even better, I was also like this but now I have improved a little bit….hope to see your more drawings”. Continuing the same track one of her admirer surprisingly said “so even Disha Patni sees Tokyo revengers”? 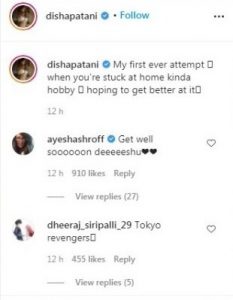 Talking about her work front, Disha Patani was last seen in the movie ‘Radhe: Your Most Wanted Bhai’, and it was a second collab with Salman Khan after the film Bharat. According to her Insta stories and updates now, she is all set for the upcoming film ‘Ek Villain Returns’ .

As the name itself refers this movie is a sequel of ‘Ek Villain’. Director knowing the audience’s interest now along with Disha Patani there are many other actors that will be seen as main leads like John Abraham, Tara Sutharia and Arjun Kapoor. Increasing the curiosity of this film ‘Ek Villain Returns’ director ‘Mohit Suri’ said that “the girls are also playing villains”. Mohit Suri also informed that the film will be released on Feb 11 next year.

It only on rhis morning, when Arjun Kapoor took social media by story by dropped the hot and dashing shirtless selfie.