Finally the season comes to an end and we have a very deserving and fruitful winner in the house. With a strong game and wise strategies as her plus point, it appears to be a great decision by all his fans

So finally the journey of the 15thy season of the most entertaining reality show hosted by Salman Khan comes to an end. After almost spending 17 weeks inside the house, the fans favorite and deserving Tejasswi Prakash wins the title of the season. It has been a great journey for the contestant starting from his relationship with Karan to her brawls with other inmates.

As we know earlier on the stage, Bigg Boss 15’s top five contestants, as well as previous contenders from this season, performed. While Shamita Shetty and Raqesh Bapat partnered, Karan Kundrra and Tejasswi Prakash performed as a couple. Salman Khan claimed it was the right option for Nishant Bhat to take the suitcase with ten lakh rupees and abandon the competition for the Bigg Boss 15 champion’s title. When Salman stepped on stage after scooping up the suitcase with the cash, he informed Nishant, “Looking at the voting which has already come in for the contenders, it was a wise move on your side.” 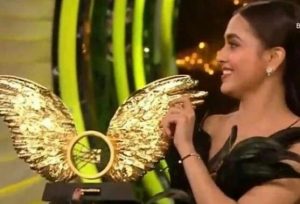 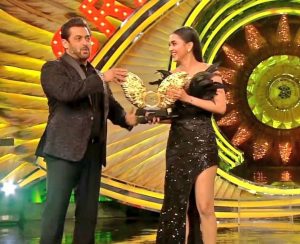 Salman Khan also brought all of the Bigg Boss 15 finalists’ family members to the stage for a dance performance. They all swayed to Garmi. The Bigg Boss house was then entered by Gautam, Gauahar, Rubina, Shweta, and Urvashi. Overall it was a great journey for all the contestants and the top finalists. There were tasks where some of them gave their best while others couldn’t perform. There were some heartbreaking nominations as well as some great wild card entries. While some of the contestants strengthened their bonds and friendships, others got into bad fights and triggered the melting point of their relationships. We also witnessed some brewing romances filled with love, jealousy, and some cute and cozy moments. We wish all the contestants who were a part of this journey the best for their future enedevours.

It was also shown that Deepika Padukone, who had come with her co-stars for the promotion of her upcoming digital film took charge and eliminated Shamita Shetty out of the race of the finalists.

Are you happy with the winner? Mention in the comments section.