Bigg Boss 15: Nikki Tamboli Lambasted By Jay Bhanushali Fans And Friends For Saying, ‘Who Is Jay?’

Nikki Tamboli has been blasted black and blue by fans of Bigg Boss 15 contestant Jay Bhanushali on social media after she asked on Bigg Boss 15 Weekend Ka Vaar ‘Who is Jay?’. This was outright insulting to the fans of Bhanushali

Nikki Tamboli’s appearance on ‘Bigg Boss 15’ Weekend Ka Vaar generated quite a stir. She was seen on stage with actors Arjun Bijlani, Neha Bhasin, and Karan Patel. She endorsed ‘BB 15’ contestant Pratik Sehajpal and criticised his co-contestant Jay Bhanushali for troubling him in her evaluation of the players and their games.

Tamboli remarked on stage that she had a “soft place” for Pratik and commended him for competing against Jay alone. In the midst of the rush, she ended up asking, ‘Who is Jay?’ ‘He is Bhanushali,’ Bijlani replied, attempting to jog her memory.

Not only has Bijlani complimented Jay’s talents, but other viewers feel she cannot criticise Jay Bhanushali’s body of work and say such disparaging things about him.

Blasting Tamboli, actress Kamya Punjabi wrote, “Who is Jay? Are u serious? Uffffff what are we watching???? @ColorsTV #BiggBoss15 oh yes it’s the soft corner n she is single n he doesn’t disrespect anyone that’s wat she likes abt him…yeh kya ho raha hai (what is happening)????? (sic).”

Who is Jay? Are u serious? Uffffff what are we watching???? @ColorsTV #BiggBoss15 oh yes it’s the soft corner n she is single n he doesn’t disrespect anyone that’s wat she likes abt him 🙄 yeh kya ho raha hai?????

Actor Balraj Sayal took to his Insta story and said, “Who is Jay? Really? Google karo behan jitna kaam apne dekha nahi hoga aaj tak utna kar chuka hai woh (Search on Google sister…you might have not seen as much work, as much as he has done).” 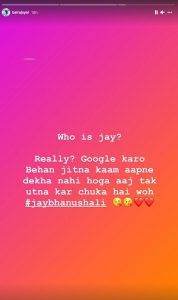 Tamboli’s question has upset even her social media followers. Here’s what some of them had to say:

@nikkitamboli next time watch ur tone and tongue atleast respect ur seniors such a disrespectful attitude u have its ur new new fame so better be grateful instead of flying! #NikkiTamboliInBB15 #JayBhanushali https://t.co/SAVDorym8S

@BiggBoss #NikkiTamboli if you know to read English google will tell you who is #JayBhanushali. Even after 10years you will not be able to reach to where he is now. Only a great person with kind heart can be a father for 2 foster kids #MahiVij

On the stage, Tamboli spoke in favour of Pratik and said, “Pratik feels very lonely. During my time no one was with me in the house except Sidharth. Pratik also has no one. I could feel him. I can see he is very lonely. I want to go inside the house and hug him.”

Salman Khan, the show’s host, also inquired about Tamboli’s relationship with Pratik. She ended up explaining that she had been watching ‘Bigg Boss OTT’ since it first aired, a show in which Pratik was a contestant. She also shared, “I like that he doesn’t disrespect anyone.” Tamboli said on the ‘BB 15’ Weekend Ka Vaar episode that Jay used to call her a ‘badtameez (mannerless)’ on Twitter when she was in the ‘BB’ house.

Tamboli also voiced her unhappiness with Jay’s use of names for Pratik such as ‘dedh footiya (one and a half foot tall),’ Tommy, and others. Jay feels he has an edge over Pratik because the latter has only been on reality shows, according to her.