Arjun Kapoor shared a sizzling shirtless selfie on his Instagram stories. He indicated that he is kickstarting his work in Mohit Suri’s directorial Ek Villian Returns

Arjun Kapoor often takes to his social media accounts to drop pictures and videos and leaves his fans in awe. The Gunday actor on late Sunday took to his Instagram stories and dropped a ravishing mirror selfie. The picture features his hot shirtless look. For an unversed, Arjun Kapoor will be seen in Ek Villain Returns alongside Disha Patani, John Abraham, and Tara Sutaria. The two schedules of Mohit Suri’s directorial film have been shot previously, and now the third schedule will feature Arjun Kapoor.

Arjun Kapoor while dropping the shirtless mirror selfie wrote, “#Ekvillainreturns”. Along with this, he tagged all his co-stars, and the producers as he has started working on the film. While talking to a leading daily Arjun Kapoor told that he will start shooting for the thriller after the release of his film co-starring Saif Ali Khan among others. He will also be working with John Abraham one more time and he is excited about it. 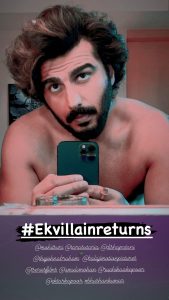 Coming towards his look in the mirror selfie, he was looking hot as he opted for a shirtless look. Arjun Kapoor gave a drop-dead hot look while his thick black beard stole the entire show. Arjun’s thick and bushy hair was also seen as he clicked the selfie on his phone.

While talking with a leading news portal, Arjun Kapoor revealed that he didn’t share the screen space with John Abraham in Sardar Ka Grandson. He was the producer along with Nikkhil Advani. They have not shot together for Ek Villain yet, but Arjun is looking forward to doing that soon. Once his upcoming film gets a release, he will be getting into shooting with John.

Ek Villain Returns marks the second collaboration of Arjun Kapoor with director Mohit Suri. They had earlier joined hands for the film Half Girlfriend, which featured Shraddha Kapoor as the leading lady. While talking about collaborating with the director Arjun said to a leading daily that he is happy to work with Mohit again. “I am certain that between Tara Sutaria, Disha Patani, John Abraham, Mohit Suri and I, we will be able to present something that’s commercial yet pushing the envelope,” he added further.