Rhea Kapoor wore an outfit on a date night with hubby, which was actually his first gift to her, 10 years ago!!!

While there was not one dry eye seeing the gorgeous wedding pics of Rhea Kapoor with long time boyfriend Karan Boolani, there still was a lot of mystery around the couple. Yet, every now and then Rhea keeps giving glimpses of their cute relationship.

The couple who are currently honeymooning in Maldives, are clearly having a time of their lives. Rhea has been keeping us all updated via her social media accounts. Recently she shared a photo of her date night with Karan. With it we got a glimpse of the very first present she received from her beau. The photo has Rhea in a black off-the-shoulder dress, accessorized with big earrings contrasted by a thin neck piece around her neck. She captioned it, “Date night wearing @saviojon. The first gift @karanboolani ever bought me maybe 10 years ago on a trip to Goa.” 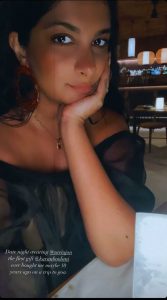 Knowing Rhea’s love for fashion, we would say Karan got it written at the first gift itself. For the uninitiated, Rhea and Karan initially met on the set of her debut film as a producer, Aisha. On the set of the film, he served as an assistant director. The film starred Sonam Kapoor, but clearly Karan had eyes only for Rhea. But looks like Rhea took her own sweet time to saying I-do, in a self-confession mode, Rhea blurted during one of her wedding posts, “12 years later, I shouldn’t have been nervous or overwhelmed because you’re my best friend and the best guy ever. But I cried and shook and had stomach flips all the way through because I didn’t know how humbling the experience would be.”

Rhea married her longtime lover Karan Boolani in a low-key wedding on August 14 at the home of her father, Anil Kapoor. Her family threw a star-studded party for the newlyweds two days later. The celebrations were attended by the entire Kapoor khandaan namely – Arjun Kapoor, Janhvi Kapoor, Khushi Kapoor, Shanaya Kapoor, Sanjay Kapoor, Maheep Kapoor, and other family members.