Kareena Kapoor Khan And Her Girl Gang Is Back With A Bang; Celebrates Amrita Arora’s Birthday In Style – SEE PICS

Kareena Kapoor Khan is having a blast with Malaika Arora Karisma Kapoor, and Arjun Kapoor as they have gathered to celebrate Amrita Arora’s birthday party

Friends are the most important people in our lives, and if there is one set of BFFs in Bollywood who has stuck together through thick and thin, it is Kareena Kapoor Khan and her girl gang. Kareena Kapoor gathered her female team, which included Karisma Kapoor, Malaika Arora, and Mallika Bhat, to surprise Amrita Arora on her big day. Kareena, Malaika, and Karisma shared photos from Amrita’s midnight birthday celebration on social media, and they’re too lovely to pass up. Arjun Kapoor also arrived at the celebration to join Kareena and Malaika. 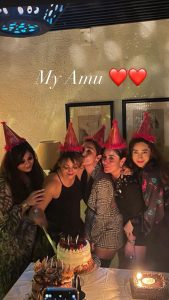 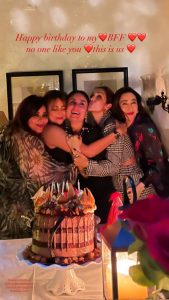 Kareena took to Instagram to share adorable photographs of herself, Malaika, Karisma, and Mallika hugging the birthday girl as she cut her cake. She tweeted yet another adorable snapshot of the three of them, this time wearing red birthday caps. Kareena wrote beside the photo, “My best friend’s birthday is today. No one likes you. This is who we are.” Malaika also posted a photo to her Instagram account with the caption, “Our gang’s glue, happy birthday, my baby sister Amuaroraofficial, Kareena Kapoor Khan, Karisma Kapoor, Mallika Bhat I adore you.” “Happy birthday to my lovely Amolas,” Karisma wrote to Amrita.

The party continued until the early hours of the morning. Amrita’s auspicious day was honoured with a star-studded bash. Kareena, Malaika, and Karisma dressed up for the momentous occasion with Amrita and others. Arjun Kapoor was also spotted at the celebration. The attractive actor looked dapper in his evening ensemble and turned heads as he walked inside. The paps photographed Malaika and her son Arhaan Khan as they arrived.

On the work front, Kareena will star alongside Aamir Khan in the film Laal Singh Chadha. The film, directed by Advait Chandan, is a Bollywood remake of the Tom Hanks-starring film Forrest Gump. This will be Kareena and Aamir’s third collaboration, following 3 Idiots and Talaash. This year, the picture will be released on April 14th.