In yet another adorable move, Jason Momoa drives friends to the premiere of No Time To Die

Jason Momoa a movie enthusiast, can be seen going for the premiere of No Time To Die. And his appearance at the premiere of the 25th installment of the James Bond series just proves the same.

Friend of Friends and a man no one would like to mess with, that’s the personality of Jason Momoa. The Aquaman of DC Universe is famous not just for his hunky body but also for being a great person to befriend. Jason Momoa also finds a way to relax in his own style. And doing the same this time as well, the actor appears in a new video dropping by at the James Bond movie premiere, which has his fans admiring.

In the latest story Jason Mamoa shared on his official Instagram account, the Aquaman appears driving a car in a busy lane. As the video starts playing further, Jason’s close friend and director Damien Bray also emerges sitting at the front seat of the classic car. 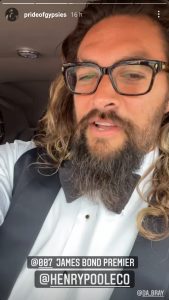 The video’s caption made it clear for fans that the Aquaman star is driving to the Royal Albert Hall, for the premiere of the 25th title of the James Bond series, No Time To Die. Furthermore, Jason also mentioned the same as his friend Damien showcased four tickets for the premiere.

However, you must have been thinking about why the two friends need four tickets and that question has also been answered in the video itself. Just as the first part of the story comes to an end, Jason moves the camera to the rear side of the car, where two of his female friends are sitting and enjoying the ride to the Royal Albert Hall.

The 42-year-old actor continuously stressed over his bow tie and formal dress as he became he appears frustrated with the traffic in London.

An appreciator of art

Jason Momoa is known for having a flair for appreciating artistic work. A movie enthusiast, Jason can be seen going for the premiere of a good movie anytime. And his appearance at the premiere of the 25th installment of the James Bond series titled, No Time To Die, just proves the same.