Amid Aryan Khan’s Drug Case, Rhea Chakraborty Shares A Mysterious Post On Gram Which Will Leave You Pondering

Amid Aryan Khan’s drug case, B-Town actress Rhea Chakraborty left a cryptic note on her IG which will leave you pondering. Reading her message left netizens with a question mark

Rhea Chakraborty has garnered quite a huge fan following despite being roped in by the Narcotics Bureau Control Bureau NCB in 2020. Whenever the actress posts something on her social media account, fans always comment and she makes it to the headlines for the same as well.

On Thursday, the Jalebi actress took to her gram to share a cryptic post on her IG stories. Which had a hidden meaning behind it. However, the actress did not mention anything further but, reading her mysterious message will leave you pondering. 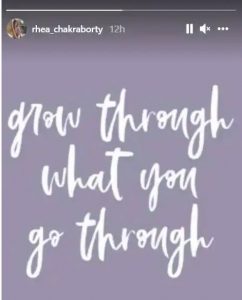 Reportedly, Rhea Chakraborty’s name had popped up when the NCB was investigating Aryan Khan’s case and the star kid and his lawyer had to prove how those charges were invalid.

For the unversed, Aryan Khan, Shah Rukh Khan’s eldest son along with at least 10 others, was found to be a part of NCB’s first-ever raid on a luxury ship, the Cordelia Cruises, reports speculate that the cruise liner was preparing to lift and voyage to Goa for a super-fun two-night stay at the former destination while having 1,300 affluent passengers on board.