Actor Tiger Shroff’s fitness trainer Kaizad Kapadia is no more. The actor took to his IG handle to mourn his demise, penning down an emotional note he shared a picture of him

B-Town actor Tiger Shroff reported the death of his fitness trainer Kaizad Kapadia on Wednesday. The actor took to his IG handle and shared a photograph of his trainer with a note that read, ‘Rest in power Kaizad Sir’. The actor even added an emoji beside it with a heart and joining hands emoji.

Fitness trainer Kaizad Kapadia has a big name in the B-Town industry and he has trained many B-Town celebs and sculpted them into what we see on screen. The legend that he is considered in the fitness world, compelled people to think how Kaizad Kapadia had changed the lives of many and left the entire fitness industry in shock. No one knows the reason for his death but, his friends have left for Pune where his last rites will be held 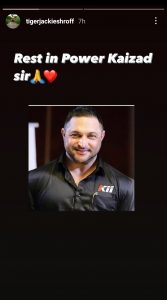 Many stars have been seen mourning the same, namely Siddhant Kapoor, Ayesha Shroff and many others. Kaizad had a fitness academy’s 11 Academy of Fitness Science in Mumbai. In one of his interviews with a leading publication, he had said how many challenges he faces as a celebrity trainer.

It seems like the hot and mind-blowing physique of Tiger Shroff that we see today on screen is because of the efforts of his trainer Kaizad Kapadia.

Tiger Shroff is steadfastly gearing up for the shoot of Heropanti 2, alongside co-stars Kriti Sanon and Tara Sutaria.

Recently, when Tiger and Tara were in London for their Heropanti 2 shoot, producer Sajid Nadiadwala had booked an entire theatre for the crew to binge watch and enjoy the latest Daniel Craig movie No Time To Die. The crew made headlines with their smiling photos all over the Internet.

Also, Tiger and Tara have been keeping their audiences entertained with their latest posts on their social media handles from the sets of their upcoming action film and adding more excitement for their fans. Heropanti 2 is bankrolled by Ahmed Khan and produced by Sajid Nadiadwala. The film will release on May 6, 2022.