Kangana Ranaut is known for criticising Bollywood and referring to it as a mafia. Now that her latest film, ‘Thalaivii,’ is finally accessible for viewing by the general public, she begs the same ‘Bollywood mafia’ to rise beyond petty feelings and embrace art

Kangana Ranaut’s latest film, the J Jayalalitha biopic ‘Thalaivii,’ has received mostly good reviews from critics and fans. The film is now accessible on Netflix, and the actress has thanked her cast and crew. Taking to Instagram stories, Ranaut wrote that rarely has a film been loved so passionately and unanimously. And ‘Thalaivii’ is one such film which got so much audience love. She was glad that people got to know Purchai Thalaivi Dr. J. Jayalalithaa’s story. She also went on to share a big thanks to her entire team for making a film that is going to be a shining diamond in the actress’ filmography for a lifetime. She feels extreme gratitude for the opportunity given by the makers.

She went on to further add that she was waiting for the so-called Bollywood Mafia to keep their political and ideological differences aside just for the sake of the movie and appreciate the talented performance and the spectacular film. She concluded by calling ‘Thalaivii’ a genuine piece of art and hoped everyone would leave their petty emotions and enjoy the portrayal of Jayalalithaa’s life and times. The story of former Tamil Nadu Chief Minister J Jayalalithaa is told in the film ‘Thalaivii.’ In the film, Ranaut portrays Jayalalithaa, while Arvind Swami portrays M. G. Ramachandran. The film explores Jayalalithaa and MGR’s friendship, as well as the former’s rise as an actress and politician. However, with the film now available on a digital platform, more people will be able to watch it. 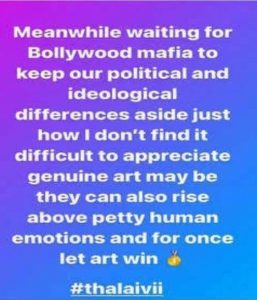 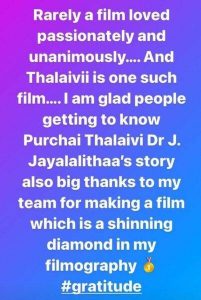 Despite the fact that the film was released in theatres across the country on October 10, it did not get a theatrical release in Mumbai. Ranaut, who regularly criticises Bollywood and refers to a ‘Bollywood Mafia, has now asked the Hindi film industry to come out and support her film by praising it. Ranaut has finished Sarvesh Mewara’s Tejas, in which she portrays an Indian Air Force pilot. She’s also working on Razneesh Ghai’s Dhaakad. Kangana is now prepping for her next two projects, including Emergency, a biopic of former Indian Prime Minister Indira Gandhi that she will also direct. She will also play the title role in The Incarnation- SITA.

(Also Read: Thalaivii: Kangana Ranaut Opens Up On Getting Permanent Stretch Marks Because Of Gaining 20 Kg; ‘Gaining And Losing Messed Up Things In My Body’)