Kiara Advani is one of the most popular Bollywood actresses, who impressed not only the acting industry but also the fans in a very short span of time. We have seen this actress playing various kinds of characters and never failed to impress the audience. Kiara Advani has a close relationship with her sister, Ishita Advani, who turned a year older today. The actress posted on her Instagram story to write her wishes for her happy birthday with one rare adorable photo of the sister-duo.

The Kabir Singh actress puts an insta story saying happy birthday sista showing her sister wearing a sleeveless denim dress. Both the sisters are wearing easy-breezy dresses in the photo with minimal makeup and hair left open. The picture will make your heart melt as in the adorable picture the sisters are hugging each other. Bollywood actress Kiara Advani with the baby photo has become a hot topic on social media. In her picture, she is kissing the baby on her cheek. The diva showed overload cuteness in her pictures. From the bombshell to being so adorable, the transition will make you mesmerized. The actress always posts lots of sensual pictures and updates her daily life on social media, but by posting this picture she blessed all of our feeds in a blink of an eye. Be it her career or her personal life, in recent days Kiara has always stayed in the headlines. 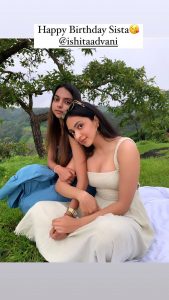 On the work front, Kiara from the starting of her career made the country share her work, for how amazing her performance was. Kiara Advani will appear in films such as Bhool Bhulaiyaa 2 and Indoo Ki Jawani. The next movie will be based on the South Indian movie Muni 2: Kanchana. This film from the South has received much acclaim for its story and is one of the most anticipated films of 2020.