Disha Patani looks like a vision to behold in a black strapless tulle gown she wore for a new photoshoot. The actress made headlines with her post as she had applied the makeup herself in it and looked phenomenal Rumoured boyfriend Tiger Shroff also complimented the star

Whenever B-Town diva Disha Patani shares something online on her IG post. It instantly goes viral. The actress often posts videos about her professional life and they are loved by fans a lot. Disha Patani is an A-listed star of Bollywood and often makes headlines because of her stunning looks, her charismatic dance moves and unparalleled fashion sense.

Disha Patani is a talent house. Apart from acting the diva can also do her own makeup and look drop-dead gorgeous. The actress often shares snippets from her photoshoot and vacay that grabs the attention of netizens. The actress never fails to create a buzz among her fans.

Today, Disha shared a stunning photo of hers dressed in a black strapless one-piece dress with her Instafam. And, undoubtedly, it too garnered several likes and comments from her followers, including rumoured boyfriend, Tiger Shroff.

Disha had posted the image on Saturday with just a ‘panda’ emoji written on the caption. The post went viral in no time and set the Internet on fire. 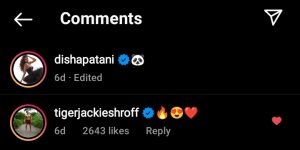 Seeing Tiger Shroff also comment on Disha’s post fans went gaga over their bond and showered all the love for two on the comments section.

Besides being the diva that Disha Patani is, the actress is also a huge dog-lover and loves to visit the beach as well. She often posts photos flaunting her sexy body and perfect-beach looks on her social media handles. Disha Patani is rumoured to be dating B-Town’s Tiger Shroff and the duo are often seen together at various public events.

On the professional front, Disha Patani was last seen in the movie Radhe alongside Salman Khan, Malang, Baaghi 2, M.S. Dhoni: The Untold Story and many others. The actress has many movies lined up for herself in the pipeline. Disha Patani had garnered a lot of appreciation for having done a cameo appearance in Salman Khan and Katrina Kaif starrer Bharat in the song Slow Motion. The actress will be seen in the upcoming sequel of the film titled Ek Villain 2. Actors like Aditya Roy Kapur, Tara Sutaria, John Abraham and Arjun Kapoor will also star in the film.