Disha Parmar Stuns In A Pink Bikini During Her Vacation With Husband Rahul Vaidya In Maldives; Calls It A ‘Sea-zing’ Day

Taking to her Insta story, Disha Parmar dropped a couple of photos looking sultry in a pink bikini. In one of the photos, Disha planted a peck on her hubby Rahul Vaidya’s cheek

Looks like, Television’s most adorable couple – Rahul Vaidya and Disha Parmar – is having a whale of a time in the Maldives. The newlywed couple recently dashed to the island to celebrate singer and former Bigg Boss runner-up Rahul’s birthday. The couple has been accompanied by their close friends. On the occasion of Rahul’s birthday, Disha Parmar took social media by storm when she posted a couple of pictures from their exotic vacay and penned a cute birthday wish for her husband. In the photo, the couple looked sexy as they posted together by the poolside.

Well, Disha Parmar made our hearts flutter once again. Our day started on a happy note when we opened Instagram and the first thing we saw was Mrs. Vaidya’s bikini picture. Taking to her social media, Bade Ache Lagte Hai actress dropped a few sensuous photos in a neon pink bikini. In the recently-shared photos, the actress is seen wearing a halter-neck pink bikini top paired with printed high-waist bottoms. Disha completed her look with an orange and white shrug. Keeping her look subtle, Disha let her hair down and let her curls do all the talking. 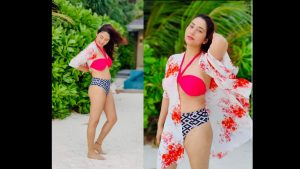 In one of the photos, Disha is seen planting a peck on Rahul’s cheek, and the shirtless singer has his eyes hooked on to the camera. In the captioning box, Disha called it a ‘Sea-zing day.’ 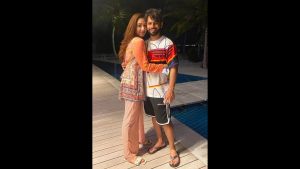 After proposing Disha Parmar on the national Television, Rahul went down on his knees and put a ring on her finger. Rahul Vaidya and Disha Parmar tied the knot on July 6, in Mumbai, following Hindu traditions. The wedding was followed by a star-studded event photo of which became the talk of the town instantly.