Varun Dhawan surely knows how to keep his fans entertained and enthralled throughout his IG post. He always posts pics that update his fans about his professional life. The actor always manages to make headlines for the same as well. Recently, Varun Dhawan took to his gram account and shared a neat and stylish photo of himself donned in a redshirt. The actor had taken the Internet by storm when he had made the post yesterday.

However, things escalated when actor Arjun Kapoor also dropped his comment on Varun’s ‘good boy’ post. He said Varun looked, ‘Natkhat Nautanki’ in his look. Even, Shershaah lead actress Kiara Advani also commented on his post saying, ‘Kuku’. The actor is currently shooting with Kiara Advani for his upcoming film Jug Jugg Jeeyo. The Badlapur actor had surprised his fans with his post and they absolutely loved it.

Not so long ago, Varun Dhawan had taken his pet dog, Joey out for an evening walk and had shared a hilarious video of himself which was viral too on the Internet. He had also posted an IG reel with co-star Kiara Advani which was also well-received by the fans.

Varun Dhawan had already crossed 38 million followers mark on his Instagram. Undoubtedly, from his debut film Student of The Year to Coolie No. 1, the actor has had a rollercoaster ride in B-Town where he made us all a part of his B-Town journey through his acting skills, dance moves and his charismatic persona. 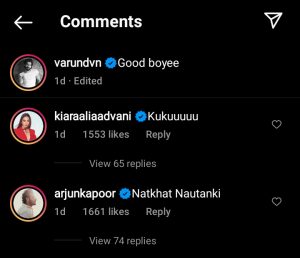 On the work front, Varun Dhawan will be seen in Bhediya alongside Kriti Sanon which will release next year. The actor was lastly seen in Salman Khan and Aayush Sharma’s action movie Antim: The Final Truth wherein he had shaken a leg in the Ganpati song Vighnaharta. The actor is working very hard for his upcoming movie Jug Jugg Jeeyo in which he will be sharing screen space for the first time with Kiara Advani.