Amyra Dastur was seen going around town in a gorgeous pink avatar. Here are some pictures of the pretty lady flaunting out her lovely smile, Have a look at the pictures

Amyra Dastur looks so gorgeous as she walked out of an event in a baby pink outfit. The outfit had a low neckline and she was looking absolutely gorgeous sporting this look. Without a doubt her smile is one of the most important characteristics of her persona. She was seen flaunting it in ample amounts.

The actress even posed for the paparazzi and spoke to them in quite candid gesture. She was seen interacting with them and had a fun interaction with them there. She has been doing the same since many many years now and she has been quite friendly with the media. She has always ensured that every member from the media properly gets to get her pictures and snaps.

This routing as well was nothing different and she absolutely was loved by all the photographers who were out there to capture her pictures. Have a look at the hottie’s pictures right here: 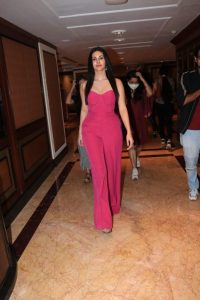 Amyra Dastur has turned out to be one of the most beautiful stars in town every time and again. She has given all these years into giving her fans some inspiration on fashion. She has been keeping a low profile all through the Covid-19 lockdown and now that the restrictions have finally been relaxed, she has taken to go out and attend an event.

On the work front, she was recently seen in Koi Jaane Na, which also starred Kunal Kapoor, Elli Avram and Aamir Khan. The film gained a lot of popularity as it was one of the very few films which could release in theatres. The popularity of the movie increases manifold when it was released on OTT platform soon after. Amyra Dastur’s character was loved by one and all. She played a character which was considered as the leading lady and only during the climax moment do you realize that she is the main protagonist and villain, around whom the entire story had been played around. It was one of the most interesting murder mysteries of this year.

Let’s wait and watch Amyra is upto next in her career. Sty hooked on for more such interesting stories.