Ahead Of His Birthday, Rahul Vaidya Lands In The Maldives With Wifey Disha Parmar To Ring In His Day; Actress Drops First Glimpse From The Island

Ahead of his birthday, Rahul Vaidya and Disha Parmar were spotted at the airport as they dashed off to the Maldives to ring in the former Bigg Boss contestant’s birthday. Sometime back, Disha shared a pic from the picturesque location

Rahul Vaidya and Disha Parmar who have recently tied the knot have been in the news for quite some time now. The couple who is fondly called ‘Dishul’ by their fans is all set to celebrate Rahul’s birthday in the Maldives this time. The couple was also spotted at the airport today as they were all set to fly to the Maldives. Rahul Vaidya, who will be celebrating his birthday on the 23rd of September, will be bringing in his birthday in the Maldives this time.
Well, Rahul’s wife Disha Parmar gave a small glimpse of their vacation on the internet today. The actress was seen enjoying her cup of tea in the Maldives.

Have a look at Disha’s story : 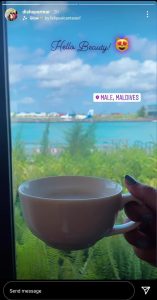 Disha also gave a glimpse of a mushy picture with husband Rahul, and the two make for an adorable couple is all we’d like to say.

Have a look at the picture here : 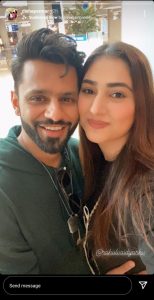 Have a look at Rahul’s pictures here:

Well, Rahul Vaidya is also one of the finalists of Khatron ke Khiladi 11.

Talking about Disha Parmar, the talented actress can be currently seen in the remake of Ekta Kapoor’s popular show ‘Bade Ache Lagte hai.’ Disha can be seen opposite Nakkul Mehta on the show. Her pair with Nakkul Mehta was loved by all her fans, as the actress made her debut with Pyaar ka Dard hai Meetha Meetha opposite Nakkul Mehta. The show went ahead to be a super hit too.

Well, how excited are you to witness Rahul Vaidya and Disha Parmar’s pictures from their Maldives vacation? Let us know in the comments section below.