After Announcing Sita – The Incarnation, Kangana Ranaut Shares A TB Picture Of Herself Dressed As Sita In School

After announcing her upcoming film Sita The Incarnation, Kangana Ranaut shares an old photo of hers dressed as Sita in school

Kangana Ranaut is one of the leading actresses in the Bollywood industry. She often takes to her social media accounts and drops alluring pictures of herself, videos, and even throwback pictures which leaves her fans in absolute awe. Now, the actress is going to be a part of the film The Incarnation Sita. She will be essaying the character of the Hindu deity Sita in the film. Kangana Ranaut shared a throwback picture on her Instagram story and revealed that she had essayed the character of Hindu deity Sita in her childhood.

In the picture, Kangana can be seen dressed as Sita. She opted for a red saree and made a hand gesture as if she was blessing her followers. She also had flowers in her hair. The throwback picture also features another girl who stood by her side and was dressed as a saint. While sharing the picture Kangana captioned her post which reads, I also played Sita as a child when I was 12 years old in a school. Ha ha..Sita Ramchandra Ki Jai. 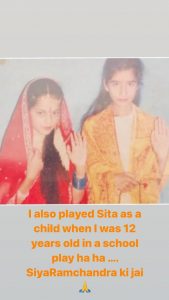 Now, coming towards the movie Sita The Incarnation, it was announced that Kangana Ranaut will essay the lead role of Sita in the film this Monday. The film will be directed by Alaukik Desai. Kangana had also shared a poster on her Instagram page. While talking about the film, director Alaukik Desai took to his Twitter and wrote, “What was a mirage, is now clarity. A dream of a pious character never explored is now a reality. I am ecstatic to bring Kangana Ranaut on board as SITA. This pious journey will change the course of how we perceive our mythology. Thank you SS Studio for your immense support and belief”.
Meanwhile, talking more about Kangana Ranaut’s work front, she was last seen in Thalaivi. The film was based on the life of former Tamil Nadu chief minister, late actor J Jayalalithaa. The Tanu weds Manu actress essayed the role in the film that hit theatres last week. The film received a great response from the audience. She also has two action films Tejas and Dhaakad in her pipeline.