Jr. spends Rs 17 lakhs on new number plate for Lamborghini. The Telegu superstar bought the new Lamborghini Urus 2 days after its launch in India. All cars of Jr. are of the number 9999 and the actor has paid huge sums in the past as well for the same.

Jr. NTR chose the special lucky number 9999 for the new number plate. Since these registration numbers are auctioned by the RTO, huge prices are quoted because the demand is high. The superstar of the south found his way to the number plate and paid a lump sum of a hefty amount of Rs.17 lakhs.

The number 9999 is a universally known lucky number and Jr. NTR chose this because of his pre-existing BMW 7 series which also has the same number.

The Lamborghini Urus owned by the Jr NTR is special because it is the Capsule Edition with a special paint scheme. It is the second only such car in India after Ranveer Singh’s Lamborghini Urus. 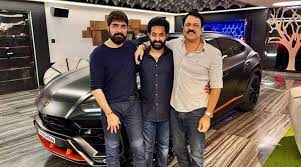 Junior NTR got the Lamborghini Urus Graphite Capsule Edition just two days after its launch in the Indian market. The special edition Urus offers a special colour combination which makes it stand out on the roads, where even the Urus is becoming a common spotting.

Past of Jr. NTR with his cars:

The “Young Tiger” of Tollywood has spent huge sums of money on getting his favourable number plate in the past as well which is why him spending Rs.17 lakhs now does not come as a shock. In 2016, Jr. NTR had spent Rs. 10.5 lakh for the number plate of his BMW 7 series car. After successful bidding, his four-wheeler had the registration number TS09 EL 9999.In fact, all his cars have 9999 on their plates.