Recently it was reported that Shrikant Shivade, the lawyer for Bollywood actor Salman Khan in the hit-and-run case passed away on January 19th. He also managed other high-profile cases

The past few days have been the news bearers of sad happenings. With Covid 19 cases surging and the country facing a tough time, there have been deaths due to varied reasons as well. Recently it was announced that Varun Dhawan lost his beloved and trusted driver Manoj, who died due to a heart attack.

Now it’s another sad news as Shrikant Shivade, the lawyer for Bollywood actor Salman Khan in the hit-and-run case, died on January 19, 2022, at the age of 67, at a private hospital in Pune. 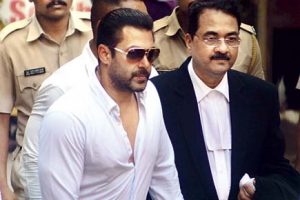 Shrikant Shivade, a well-known criminal lead attorney who represented two alleged in the 2 G spectrum circumstance and managed elevated legal cases of Bollywood actors like Salman Khan, Saif Ali Khan, and Shiney Ahuja, took his last breath on January 19th after a long battle with cancer, according to sources close to his family.

He was 67 years old at the time. According to them, Advocate Shivade has been diagnosed with leukemia (blood cancer).
Shivade, a law school graduate of the Indian Law Society, has previously represented actors Salman Khan in a hit-and-run case in 2002 and Shiney Ahuja in a rape case in 2009.
He had previously defended two defendants in 2 G spectrum trials, as well as Peter Mukerjea in the Sheena Bora murder case. Bharat Shah, a diamond merchant, was also served by him.

Salman Khan was convicted for aggressive and careless driving on September 28, 2002, when his automobile collided with a bakery in Mumbai, killing one person who was lying on the footpath outside the shop and injuring three others. He was charged with criminally negligent homicide, but the accusations were ultimately withdrawn. He was officially prosecuted with culpable homicide in the incident on July 24, 2013, and found not guilty.

(Also Read: Salman Khan Still In The State Of Dilemma For Sister Alvira Produced Projects ‘Black Tiger’ And ‘Veteran’ – FIND OUT WHY)

On the work front, the actor is currently ramping up for the shoot of Tiger 3. The film is slated to hit the big screens at the end of this year.

HILARIOUS! Saif Ali Khan Reveals How He Was PUNCHED And Had TO Apologise To Former Wife Amrita Singh – Deets Inside

HILARIOUS! Saif Ali Khan Reveals How He Was PUNCHED And Had TO Apologise To Former Wife Amrita Singh – Deets Inside