The “Super fast Director of Tollywood”- Puri Jagannadh celebrates his 55th birthday! The director receives lovely wishes from the team of his upcoming film “Liger” which serves as the Telugu Debut for the Star Kid Ananya Pandey

Birthday wishes poured in for filmmaker, screenwriter and producer, Puri Jagannadh’s 55th birthday today (September 28). Social media was abuzz with wishes for the director, from celebrities such as Rahul Vijay, Naga Shaurya, Satya Dev, Kartikeya, among others.

Actress Ananya Panday, who will be making her debut in  Telugu cinema with “Liger”, directed by Puri, and will share screen space with Vijay Deverakonda, wrote a sweet note for the film director on Instagram. She also shared a throwback photo with Puri and “Liger” film’s co-producer, Charmee Kaur. Ananya wrote: “Happy birthday to the most special, master creator Puri sir. So blessed to be working with you on Liger. Can’t wait to get back to the madness.” 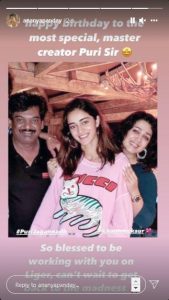 Charmee Kaur also penned a heartfelt birthday note for Puri. Sharing a photo with Puri on Twitter, she wrote, “Happy birthday to my most favourite human…the trust and belief u have over me, I hope I live up to it always n keep making u feel proud.”

“Liger”, based on the story of a mixed martial arts expert, is being shot in Goa currently.  The action-drama will feature Mike Tyson. The film also stars Ramya Krishnan, Vishu Reddy, Ali, Makarand Desh Pandey, Ronit Roy and Getup Srinu.

Puri is immensely loved and respected for his work in Tollywood. He made his directorial debut in 2000 with the super hit Telugu film “Badri”, starring Pawan Kalyan, Renu Desai and Ameesha Patel. Puri debuted in Bollywood with the film “Shart: The Challenge” in 2004 but it was his Bollywood film “Bbuddah Hoga Terra Baap” in 2011, starring Amitabh Bacchan that received critical acclaim.

Puri is known for the great speed of his work, the way in which he times his writing and direction and at the same time executes the finest shots of all his films which hit the box office and make huge successes.