The ticket row: Telegu actor and politician Pawan Kalyan questions Mohan Babu over his silence on the ticket pricing issue. Mohan Babu responds with an open letter to him

At the pre-release event of “Republic” Telugu megastar and politician Pawan Kalyan raised the issue of movie ticket pricing. The senior actor questioned his senior colleague from the industry –  Mohan Babu’s silence over the issue.  He also accused the Andhra Pradesh government of trying to take control of the Telugu film industry. The president of the Janata Sene Party asked Babu to come out and express his stand on the issue.
Consequently, Mohan Babu wrote an open letter and shared it on his Twitter account. He wrote that he is currently focusing on the MAA (Movie Artistes Association) Elections. “Currently, my son Vishnu is contesting for the President post of the Movie Artists Association. The election will be over on 10th October. After that, I will answer every question you raised,” tweeted Mohan Babu. 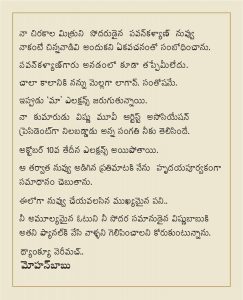 Mohan Babu also asked Pawan Kalyan to extend his support to Vishnu and his panel in the MAA elections. The government of AP had announced that a state-run website will be set up to sell movie tickets online. This announcement has elicited a mixed response.
Perni Venkataramaiah (minister of Transport and I&PR) had held talks with producers, distributors, and exhibitors from the Telugu film industry and said the government shall soon roll out the online ticket system.

The AP Minister assured them that the government would respond positively and that the only aim of the government was to make entertainment affordable to the general audience without creating a hole in their pockets.

Pawan Kalyan is not happy with this decision and has called it interference by the government.

Pawan Kalyan is a well-known Indian actor who made his debut with Akkada Ammayi Ikkada Abbayi” in 1996.  Power Star Pawan Kalyan is not just an artist but a brand with a massive fan following. After Kalyan made a speech at the venue, the Telugu Film Chamber of Commerce released a statement saying that “These are not the voices of the industry as a whole….”

Kalyan has however received support from actors like Nani and Kartikeya.