Legendary actress Rekha turned another year beautiful today. The actress isn’t much seen in the public eye but whenever she goes in public it’s a treat to watch her be ageless. With her statement red lipstick and middle parted open hair and a gorgeous saree, she’s a vision to behold.

Kangana Ranaut wished the actress on her birthday today and said Happy birthday to her ‘Godmother’ dear Rekha ji. Epitome of grace, elegance and beauty

This picture was clicked at Virat Kohli and Anushka Sharma’s reception where they were all smiles for the camera. 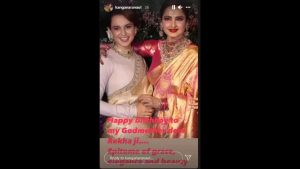 While Kangana calls Rekha her ‘Godmother’, Rekha, too, had said at Marathi Taraka Awards that if she had a daughter, she would have been like Kangana. Kangana had presented Rekha a special award at the event after which, Rekha had showered her with praise in her acceptance speech. She had also called her real life Jhansi ki Rani before the release of Kangana’s film Manikarnika: The Queen of Jhansi. On the other hand, Kangana, who was dressed in a black silk sari, had revealed that it was gifted to her by Rekha.

Kangana’s sister Rangoli Chandel had also once revealed that the actor was a ‘wannabe’ Rekha.

(Also Read: Rekha Birthday Special: 3 Films Which Were Made Iconic By The Evergreen Actress)

Rekha had also once surprised Kangana with flowers at 3 am. Kangana had not attended the Filmfare Awards where she won a trophy for her performance in Queen. Talking to a leading daily, Kangana had said that in the night, at 3 o’clock, Rekha ji came to Kangana’s house with the award and flowers. Isn’t that amazing? Isn’t that the most amazing thing ever? She was totally baffled mean she was like, ‘What is this?’ Beyond awards, beyond appreciation, beyond hit and flops. she means, She wished her parents were here so that someone could share this thrilling moment. That gesture and courtesy of Rekha ji is beyond everything. Kangana was with her friends and was shocked and very impressed that she had been given the award despite Kangana not being there.