Kangana Ranaut comes out with a reply to Hrithik Roshan’s supportive post for Aryan Khan who is under NCB arrest in a drug case. Kangana calls supporters Mafia Pappu in her Instagram story

Soon after Hrithik Roshan dropped the post in support of Shah Rukh Khan’s son, Kangana Ranaut was quick to react on the post. She took to her Instagram stories and wrote in opposition of Hrithik’s support for Aryan Khan. She went on to write, “Now all Mafia Pappu coming to Aaryan Khan’s defence…We make mistakes but we mustn’t glorify them…I trust this will give him perspective and also make him realise the consequences of his actions…Hopefully, it can evolve him and make him better and bigger….It’s good not to gossip about someone when they are vulnerable but it’s criminal to make them feel that they did no wrong….#Word.” 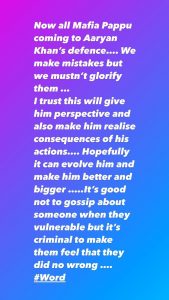 For an unversed, the things between Kangana Ranaut and Hrithik Roshan have not been so good for a long time. As Kangana had said earlier that the two dated while he was still married to his ex-wife Sussanne Khan. This is something Hrithik has always denied. The things didn’t stop here, but they also filed defamation cases against each other.

A few days back, Hrithik’s ex-wife Sussanne Khan had also shown support for Aryan. She went on to slam the witch hunt against him. Sussanne Khan called about Indian columnist Shobha De who claimed that Aryan’s arrest should be a wake-up call for parents. She shared that Aryan was at the wrong place, at the wrong time and she stands by Shah Rukh Khan and his wife Gauri Khan.