Right after Samantha Akkineni and Naga Chaitanya made their divorce news official, Kangana could not keep calm and quickly took to her Instagram stories and targetted Aamir Khan labeling him a divorce expert. She shared that, Whenever divorce happens, the fault is always of the man may sound orthodox or too judgemental but this is how God has made man and woman, their nature and dynamics. Primitively, scientifically, he is a hunter; and she is a nurturer. Stop being kind to these brats who change women like clothes and then claim to be their best friends. One out of hundred’ women could be wrong, her first statement said.

In her second statement, she said that shame on these brats who get encouragement from the media and fans. They hail them and judge the woman, divorce culture is growing like never before. This south actor who suddenly divorced his wife was married for 4 years and in a relationship with her for more than a decade recently came in contact with a Bollywood superstar who is known as a Bollywood divorce expert. Has ruined many women and children’s lives is now his guiding light and agony aunt it all went smoothly. This is not a blind item we all know who am I talking about. 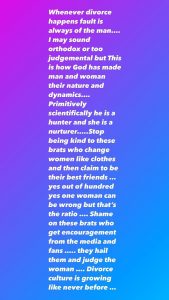 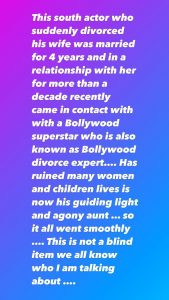 Naga Chaitanya is gearing up for his debut in Bollywood with the Aamir Khan and Kareena Kapoor starrer Laal Singh Chaddha which is a remake of Forrest Gump which was released in 1994.

Naga also released an official statement for his fans which said that After much deliberation and thought Sam and Naga have decided to part ways as husband and wife to pursue our own paths. They are fortunate to have a friendship of over a decade that was the very core of our relationship which they believe will always hold a special bond between them. The duo also requested their fans, well-wishers, and the media to support them during this difficult time and give them the privacy they need to move on and thanking their fans for their support.

Naga’s father also shared a statement on his Twitter which read that whatever happened between Sam and Chay is very unfortunate. What happens between a wife and husband is very personal. Sam and Chay both are dear to him. His family will always cherish the moments spent with Sam and she will always be dear to them! May God bless them both with strength.

(Also Read: Kangana Ranaut Takes A Jibe At Bollywood Filmmakers For Announcing Their Release Dates; Taps In Her Creative Side)

Samantha and Naga’s divorce came as a shock to the internet and all the fans are heartbroken with this news. Kangana has clearly blamed Aamir Khan for this as the actor too recently shared the news of parting ways with his wife Kiran Rao. Aamir and Kiran were married for over 15 years.