Hina Khan is one of the most popular faces of Indian television. The actress has carved a niche for herself in the Entertainment industry and is a role model for all her fans. Well, the actress was going through a rough patch some time back after her father passed away. Hina was also suffering from Covid after her father passed away and had to be away from her grieving mother after being quarantined. It was during this rough patch that the actress gained a few kilos. However, Hina revealed that she decided to prioritise her mental health over gaining a few kilos and also stated that now she is back on her fitness routine. Hina took to her Instagram handle to share a picture of her and penned an inspiring message for all her fans.

In the picture Hina can be seen posing in gym wear in front of a mirror. Sharing this picture Hina revealed how gaining a few kilos in the past few months did not bother her and how she decided to prioritize her mental health over her body. She revealed that she was not in the best head space in the past few months and took some time off to care for her mental health. In the end, Hina was seen stating that she is however now back on her fitness routine. 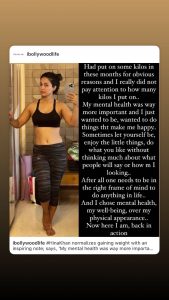 Well, The actress is now back to her fitness routine and is often seen sharing pictures and videos from her workout session on her Instagram handle.

Have a look at a few pictures and videos of Hina Khan’s workout session here : 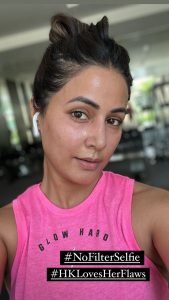 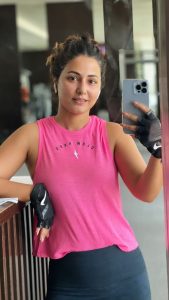 Well, what is your take on this motivational post by Hina Khan?