Actor James Michael Tyler who was best known for his role of Gunther in the sitcom FRIENDS passed away. He was 59 when he took his last breath. Tyler has been battling cancer since 2018. The news of his sad demise was shared by Kevin Bright on the Twitter handle on Sunday evening. He wrote, “James Michael Tyler Our Gunther passed away last night. He was an incredible person who spent his final days helping others. God bless you James, Gunther lives forever.”

Soon after receiving the news of Michael passing away, Bollywood actress Anushka Sharma is heartbroken. She took to her social media account to share her grief. The actress posted an Instagram post confirming the news and added a broken heart emoticon on her Instagram Story. The post reads, “James Michael Tyler famous for playing Gunther on Friends has died at the age of 59.” 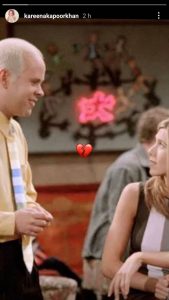 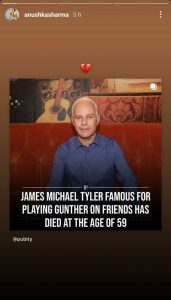 Not only Anushka Sharma but also Kareena Kapoor Khan took to her social media accounts to mourn the death of late actor James Michael Gunther. Taking to her Instagram stories Kareena shared a photo from one of the scenes from the popular sitcom FRIENDS. Kareena also dropped a heartbroken emoji alongside the photo.

(Also Read: Kareena Kapoor Khan Nails Her Saturday Outfit As She Gets Snapped Doing THIS)

For an unknown fact, the late actor was diagnosed with prostate cancer in September 2018 after undergoing an annual checkup. He had revealed his diagnosis earlier this year while talking to a leading news portal that he was diagnosed with advanced prostate cancer, which had spread to his bones. He has been dealing with that diagnosis for almost the past three years. He was at stage 4 during his last days. Tyler is survived by his wife, Jennifer Carno.

Now, talking about Anushka Sharma, the actress was last seen in Zero and after that, she has not been seen in any films. Anushka is seen in advertisements but has not made any new announcements. She has been sharing multiple photos of her daughter Vamika and her husband Virat Kohli on her social media accounts. On the other hand, Kareena Kapoor Khan will be next seen in Laal Singh Chaddha, alongside Aamir Khan.