Did You Know Alia Bhatt Was Once Startled By Her Bodyguard? Reason Will Shock You

Discover why Alia Bhatt was previously afraid of her bodyguard. From the beginning of her profession to the present, she has only grown and improved as a person. It all happened one fateful night when his sudden appearence startled her

Alia Bhatt is one of the most beautiful divas in the Hindi film business. From the beginning of her profession to the present, she has only grown and improved as a person. She has been sending shockwaves with her body of work on the big screen for many years, and we are all extremely proud of all of her accomplishments.

While all of you Alia Bhatt followers and admirers know a lot about her, how many of you are aware that she once had to face a horrible situation because of her bodyguard?

According to rumours on other websites, Alia Bhatt was stuck at 3 a.m. without a bodyguard. He wasn’t answering the phone at first, but when he arrived to pick her up, she noticed he was inebriated. Alia didn’t react much at the moment, but after hearing the news, sources in the media claim that Alia’s mother, Soni Razdan, fired the bodyguard the next morning. 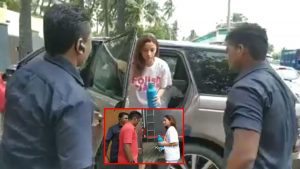 Alia Bhatt has a jam-packed work schedule ahead of her. The actress will next be featured in Sanjay Leela Bhansali’s Gangubai Kathiawadi and SS Rajamouli’s RRR, both directed by Bhansali. Darlings, which she is co-producing with Shah Rukh Khan, will also star her. She will also appear in Farhan Akhtar’s Jee Le Zaraa alongside Priyanka Chopra and Katrina Kaif, as well as Karan Johar’s Rocky Aur Rani Ki Prem Kahani alongside Ranveer Singh.

Bhatt will launch off 2022 with Gangubai Kathaiwadi on January 6, followed by RRR on January 7.

Bhatt plays the major character in Sanjay Leela Bhansali’s Gangubai Kathiawadi, which is based on a real-life figure. She is also the lone female protagonist in filmmaker S.S. Rajamouli’s RRR, which is projected to be the largest film ever made in India. With two back-to-back movies under her belt, Bhatt’s stock should inevitably increase, especially after Sadak 2, which didn’t exactly earn her many fans.

Darlings, her debut film in which she reprises her role as the major heroine, should get her points. The film, which was started during the epidemic and then completed quickly, is intended to be a lighthearted affair that young Alia Bhatt fans will enjoy. For the young, there’s Rocky Aur Rani Ki Prem Kahani, in which she’ll be seen with her Gully Boy co-star Ranveer Singh. Given that it is being directed by Karan Johar, the film is likely to make a big impact when it is released in 2022.