Is it true that Rakul Preet underwent cosmetic surgery? There has been a lot of speculation in the industry circles but has the actress herself admitted it to the fans, or is it just another rumour?

There is much talk about Rakul Preet’s new look since she has uploaded photos from her shooting diaries in London. There is no doubt that her photoshoot was appreciated immensely but people could clearly make out a drastic change in her face structure. Naturally, comparisons arose between her new picture and her old pictures. And this seems to have given rise to rumours about lip job. 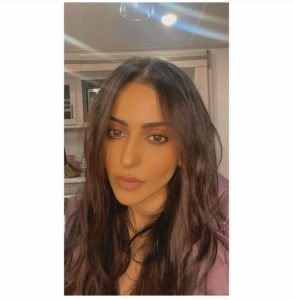 Some media reports also speculated that Rakul got cosmetic surgery for lips to improve her looks. This is not new as several actors in T-town and B-town have opted for cosmetic surgeries to enhance their looks.

The picture has gone viral on the internet since Rakul herself uploaded it. Many fans suggested the possibility that it could be because of the different filters that tend to modify the features a little bit. Although many celebrities fall for this concept of altering their physical features, considering they are working in the entertainment business and are expected to look visually appealing enough. There is no harm in enhancing themselves through such means or adding more glamour by undergoing cosmetic surgeries, however very few of them come out and admit it publicly, it is only their fans who speculate and recognize the changes by noticing the difference in facial expressions from their previous films.

On the Professional front, Rakul Preet is more occupied with Bollywood films. In Telugu, she has Krish and Panja Vaisshnav Tej’s Konda Polam due for release. She has Thalaivi director AL Vijay’s Tamil-Telugu bilingual ‘Oct 31st Ladies Night’ in her kitty. It is said to be a suspense thriller that revolves around four women. She has John Abraham’s Attack, Ajay Devgn’s MayDay, Thank God, Ayushmann Khurana’s Doctor G.

Currently, her 8 films are in line for release, out of which three films have been completed and 4 films are yet to be shot, while 1 film has been delayed due to unknown issues between the producer and director of the film.