Deepika Padukone Gives A Glimpse Of Her Favourite Diljit Dosanjh Song; Can You Guess The Track?

Guess which song Deepika Padukone is currently hooked on? Taking to her Instagram stories, DP gave us an insight into her favourite Diljit Dosanjh song

Actress Deepika Padukone is considered to be one of the most popular actresses in Bollywood. The actress has a massive fan following on her social media. The Piku actress recently took to her Instagram story and gave us a glimpse of her current favourite song which she is listening to on loop. Can you guess which is that song? Well, for all the DP and Diljit Dosanjh fans, the Ram Leela actress is hooked to Lover.

Lover is crooned by Diljit Dosanjh and written by Raj Ranjodh. The Lover is a romantic song that can get you in a groovy mood in no time. 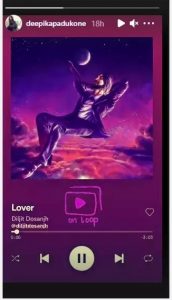 Meanwhile, Deepika is making headlines for her latest and swanky purchase in Alibaug. As per the latest reports, DP and her husband Ranveer Singh bought a luxurious bungalow worth Rs 22 crore in the coastal city on September 13. Not only that, but the couple also paid 1.32 crore stamp duty.

On the professional work front, Deepika Padukone and Ranveer Singh will once again be seen together on the big screen. They will be sharing the screen space for the first time in ’83, after getting hitched. In ’83, Ranveer Singh will essay the character of the lead role of Kapil Dev and Deepika Padukone will be seen playing his wife’s role Romi in Kabir Khan’s directorial. On the other hand, Deepika has an interesting line-up of films in her kitty. The leggy lass will also be seen with Prabhas in her upcoming film.

Padmavat Actress Deepika Padukone is also part of The Intern remake and will be seen sharing the screen space with Megastar Amitabh Bachchan. Before Big B, Rishi Kapoor was part of the movie, but unfortunately, the legendary actor passed away on April 30, 2020. Apart from acting in films, the cocktail actress also made her debut as a producer for Chappak in 2020.

Deepika Padukone recently announced her second Hollywood film. That apart, DP will also be seen with Shah Rukh Khan in Siddharth Anand’s upcoming film Fighter and another one with Hrithik Roshan, Ananya Panday and Siddhant Chaturvedi in Shakun Batra’s next.