Bigg Boss 15’s audience is going to witness the third weekend ka vaar of this season. The past two weekend ka vaars recieved a lot of love from the loyal audience of the show. Well, this weekend ka vaar too is going to be a star studded affair, with popular television faces walking on the stage of the show. Two amongst these faces are Bigg Boss 11’s first runner up Hina Khan and Popular host of Indian television Maniesh Paul. Both Hina and Manish have been carving a niche in the Indian television with their impeccable work.

Well, If reports are to be believed, Hina and Maniesh are all set to make an appearance on the show today and will be seen interacting with the contestants of the show, Host Salman Khan and the audience too. Hina and Maniesh are apparently coming on the stage of Weekend ka vaar to promote their upcoming projects.

Well, Hina Khan took to her instagram stories today to hint towards her appearance on the controversial reality show. Hina posted a boomerang of herself in her car and was seen asking her fans to guess where is she heading to. 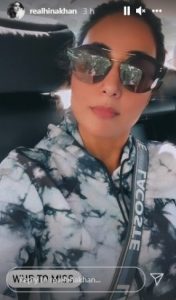 Well, the actress was also seen mocking the concept of Bigg Boss 15 and called out the makers for all the violence that had been taking place in the Bigg Boss 1t house. The actress who generally refrains from commenting on Bigg Boss, took to her twitter handle to take a jibe at the makers of the show.

So how is it going folks, are u enjoying smackdown and RAW mon-fri 10:30pm now a days on #colorstv 🤣
Ek time tha jab ungli lagaana allowed nahi tha and now 🤕🤒😷
What’s happening BB.. BiggieBoo?
I usually don’t tweet about BB
But this is so damn funny and I could not resist..

With all due respect BB, kahin aap vishwasudari ke pyaar mai to nahi pad gaye hain🤣🤣🤣 open your Aankh BB PLZZZ.. wake up..I don’t blame anyone in the house.. it was the first and the most imp rule of BB tht u cannot touch anyone.. but now this rule seems non applicable 🤷‍♀️

Well, how excited are you to watch Hina and Maniesh on the Weekend Ka Vaar?