We finally get to see Aparshakti Khurana’s first child and daughter Arzoie’s full face, thanks to Ayushmann Khurrana

Aparshakti Khurana and Aakriti Ahuja’s Daughter Arzoie came into the world on August 27 2021. The couple had kept her face under wraps and didn’t want the media attention and were sure to keep the camera flashes away from the munchkin. On social media, the duo did share sneak peeks here and there without revealing the full face. Finally the wait is over and Arzoie’s full face was unveiled by Aparshakti’s brother Ayushmann Khurrana on social media and Arzoie is absolutely beautiful and adorable

Actor Ayushmann Khurrana shared a new picture of his niece Arzoie, revealing her face where Aparshakti was seen holding her and looked away from the camera and Arzoie is seen peacefully sleeping in father’s arms. On the couple’s anniversary, seven days back, Aakriti had shared a picture of the Aparshakti and Arzoie, fast asleep and had written: “7 years of calm and chaos summed up.” 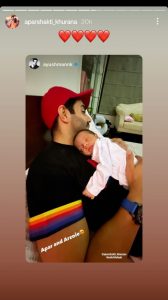 Aparshakti has been a great suppoting actor for big budget films who add the extra wow element to a camera shot which remain fresh in our memories. One example is the classic Lukka Chuppi where he’s Kartik Aaryan and Kriti Sanon played the lead role and some other include Bala, Dangal, Pati Patni Aur Woh with many more to come to his kitty.

Aparshakti was recently seen as one of the lead actors in the Zee5 comedy film, Helmet. The film also starred Pranutan Behl, Abhishek Banerjee and The Family Man actor Sharib Hashmi. Aparshakti’s character in the film wears a helmet while selling condoms. This new concept also induced giggles and burst of laughter for the viewers.

In an interview with a leading daily Aparshakti also revealed his first experience in buying a condom and said, “When I went to buy my first packet of condoms, I was in college. In those times, there would be delivery boys who wore helmets and came on their bikes to deliver packages. They used to be in a hurry and delivered packages without taking out the helmet. They would just get off the bike, drop the package and leave without taking the helmet off. So, I quickly went, parked my bike and did not take my helmet off. I bought the condom with my helmet on and came back. Little did I know I’d be doing something similar years later in a film. Only, there I was buying condoms, and I was selling them in the film.”