Anushka Sharma’s Morning Selfie Will Unwind You In Nirvana; But Where Is Vamika?

Anushka Sharma is one of the most popular, talented and highly paid actresses and producers in India. She has always impressed the audiences with her craft and kept them entertaining without fail. She is an outsider and has surely made her name for herself in the industry with sheer hard work and dedication. She has done some amazing films and always impressed the audiences with her great dancing skills.

Her vacation pictures with daughter Vamika are always a buzz of the town. She uploaded a sun-kissed selfie on the gram and looked fresh as a daisy in her morning picture. She was seen wearing a snake print night suit with black buttons. She looked absolutely beautiful with no make-up on. 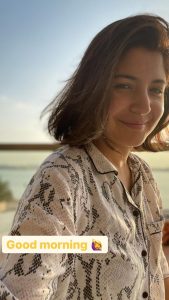 Anushka looked fresh as a daisy in a white top with red and yellow stripes in Virat Kohli’s recent post. She wore dark blue three-fourth denim pants and completed her look with white sandals. On the other hand, Virat was seen in a basic grey, round neck t-shirt. Vamika was seen seating on a chair with two cute little ponytails. The family was seen enjoying their food together. The post garnered a lot of attention from the fans, followers and various celebrities. Katrina Kaif, Suniel Shetty and many other artists commented on the picture.

(Also Read: After Anushka Sharma, Virat Kohli Shares A Full Family Portrait; Neither Virushka Nor Vamika But THIS Cute Thing Stole Out Heart – KNOW What)

Virat Kohli never fails to enthral his audience with his performance and on the other hand, on the professional front, Anushka was last seen in the 2018 film Zero alongside Shah Rukh Khan and Katrina Kaif. She has also been working on several of her production ventures, digital shows and movies. She will next see in Kaneda, a Bollywood romantic-drama movie, the film’s title is inspired by the Punjabi pronunciation of the country Canada. the movie is directed by Navdeep Singh and will be released on November 5, 2021. Next, she will be doing a biopic based on cricketer Jhulan Goswami.