Before Salman Khan gets busy with Bigg Boss, we saw his Antim co-star Aayush Sharma out in the town for a dubbing session. He looks damn handsome in every pic

Aayush Sharma, Salman Khan’s brother-in-law and Arpita Khan’s spouse, will appear with Salman in ‘Antim.’ While we’ve seen him at a number of events and parties, here are a few more photos of the young talent you shouldn’t miss.

After the first glimpse and first song ‘Vighnaharta’ from Antim, Aayush Sharma has piqued the interest of the public with his never-before-seen persona as the infamous criminal Rahuliya. Aayush stepped out in the city for a dubbing session for the film, sporting a black shirt and white leggings and showcasing his toned figure, which he sculpted for the part. Here are the pictures from the evening: 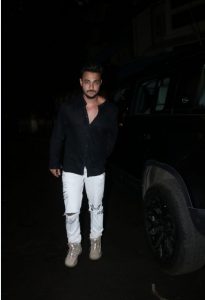 Aayush has piqued everyone’s curiosity in his film by receiving a lot of affection from the paparazzi for his forthcoming role Rahuliya.

When the first song from the film was published, he made news for his commitment, as director Mahesh Manjrekar disclosed that Aayush shot the song while having a fractured hand.

Salman will invite Aayush and the entire team of Antim for a promotional event at Bigg Boss once the show starts on October 2. The show is going to be bigger than ever, and now it’s only time that we are dying to watch who all will be actually there on the show. We shall be revealing the full names of the contestants soon. So stay hooked onto this page for the entire list of confirmed contestants.

Coming back to Antim, are you excited to see Salman and Aayush battle it out? We surely are. Which among these pictures of Aayush Sharma is your favourite? Share your thoughts with us in the comments section below.