Shah Rukh Khan Found A Best Friend On The Birth Of THIS Special Person; Find Out Who Is He

Shah Rukh Khan as we all know has made a name for himself in the industry which is just commendable. Recently it was learned that King Khan found his best friend when this special person was born

Shah Rukh Khan aka SRK is a legend across the world. He is not only an actor but also a film producer. He tied a knot with Gauri in 1991. They now have 3 kids Aryan, Suhana and Abram. Gauri is a film producer and an interior designer. It is been 31 years since their marriage now.

SRK had opened up in an interview about what did he feel when their first child Aryan was born. Shah Rukh Khan referred to his newborn son Aryan Khan as his “newer friend” shortly after his birth. 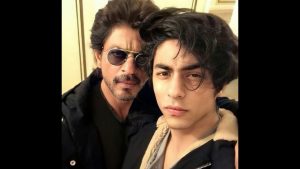 Shah Rukh Khan has stated repeatedly that he tries to treat his three children as friends and be a friend to them rather than an older person. And it appears that he has had that mindset from the beginning. Shah Rukh had remarked in an old video filmed just after the birth of his first child, Aryan Khan, in 1997, that his baby was his new friend. Shah Rukh Khan was already a successful actor when Aryan Khan was born, with films like Dilwale Dulhania Le Jaayenge in his career. In 1997, Shah Rukh Khan and Gauri Khan welcomed their first child, Aryan, into the world. Suhana, Shah Rukh’s daughter, was born in 2000, while AbRam, Shah Rukh’s son, was born via surrogacy in 2013.

That interview followed with questions about balancing his job and personal life, as well as whether he wished he had more time to spend with his family. Shah Rukh reacted by stating that he is prompt. He had said that he gets a lot of time with him. since then, he has always been a good dad and a good husband, overall the real family man we can say, undoubtedly.

Shah Rukh was congratulated on the birth of his son (Aryan) by the interviewer in the video, who asked him how it feels to be a father. Shah Rukh said with a smile that this was a common question that everyone asked him. and replying to the same he said, he just got a newer friend, that’s all, Shah Rukh responded when the journalist asked whether it means life isn’t changed.

Shah Rukh Khan is planning for his acting comeback. Since his 2018 film Zero, he hasn’t been seen on screen. He’s now filming for Siddharth Anand’s Pathan, according to reports. Deepika Padukone and John Abraham also star in the flick.

(Also Read: Shah Rukh Khan’s Daughter Suhana Khan Is Spreading Her Black Magic In THIS Stunning Outfit; Her Look Will Hypnotise You – CHECK OUT)

Aryan was detained by the Narcotics Control Bureau in October after a drugs raid on a cruise liner in Mumbai. This made last year particularly difficult for the family. Before being granted bail in the case, the then 23-year-old spent 25 days in jail. The family, particularly Shah Rukh, remained silent on the situation, making no public statements.