KJ Apa and Clara Berry are officially parents! The couple revealed they welcomed a baby boy, and shared details of his unique name and birth date. The two started dating back in 2019 and now have their first baby.

One might know KJ Apa from the lead role of Archie Andrews in the CW drama series “Riverdale”. The “Riverdale” star’s 27-year-old model girlfriend, Clara Berry, announced that she gave birth in a recent Instagram post.

“Sasha Vai Keneti Apa, born on the 23rd of September,” the proud new mom wrote. “He is a perfect perfection. I am the luckiest to have now two men of my life, filling my heart with this cosmic gigantic vast love.”

The baby’s tiny hand grips one of Berry’s fingers in the photo she posted announcing his birth. 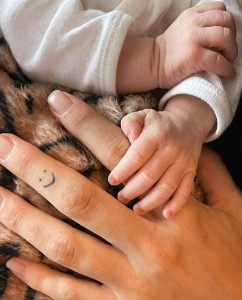 Though Apa, 24, didn’t post anything to announce his son’s birth, he did give his girlfriend-turned-baby mama a hearty shout-out while promoting his new album.

“@clara.berry for taking my love for you to another dimension this week,” he added while writing “thank you” to several friends and family members.

Several of Apa’s “Riverdale” co-stars were quick to send congratulations to the couple in the comment section of Berry’s post.

KJ’s Riverdale co-star, Lili Reinhart expressed her excitement for the couple in the comments section.

“Can’t wait to meet him,” the actress gushed, adding the heart-eyes and red heart emojis. “Congratulations.”

“River’s new bestie!! #boymom,” Vanessa Morgan wrote, referring to her son, River, who was born at the beginning of 2021.

Berry later posted a photo of herself and tagged her boyfriend directly over her bare belly.

“She’s pregnant btw,” Apa commented cheekily, to which Berry responded, “We are.”

The couple was first rumoured to be dating in Dec. 2019 after they were spotted engaging with each other on social media. Apa later confirmed the romance himself in January 2020. This is the first child for both of them.

At 26-years-old, Clara Berry is four years older than her beau and already boasts quite an impressive career. Her self-professed savviness for business and media has seen her garner over 484,000 followers who track her every post. Though Berry began modelling as a hobby while she was a fashion student in France, she was scouted and signed by the modelling agency Present Model Management in 2016 and has been working full-time ever since.