Rashmika Mandanna will play the role of Srivalli, Allu Arjun’s love interest, in Pushpa. Her first-look poster from the film was dropped online on September 29

Natural and rustic! That’s the look of Rashmika Mandanna’s character in “Pushpa: The Rise” which also stars popular actor Allu Arjun. The first look poster has been shared by the film’s production house and also the actress herself. It shows her as ‘Srivalli’ – a village girl fiddling with her earring in front of the mirror. Directed by Sukumar, the film deals with sandalwood smuggling and depicts Srivalli as the love interest of Pushparaj played by Allu Arjun. 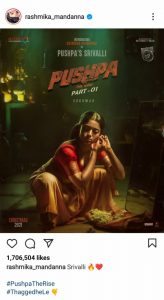 The food is being cooked in the background and Srivalli is getting ready.  In front of her are kept a sari, flowers for her hair, and bangles. Sharing the first look poster on their Twitter handle, Mythri Movie Makers, the film’s production house, wrote, “Our fiercest #PushpaRaj’s heart melts at the sight of his love. Meet @iamRashmika as #Srivalli. #SoulmateOfPushpa.”

This picture shows the social circumstances of this character on the one hand, while on the other hand brings out the femininity of this character. While her pose gives a hint about how naturally the lives of rural people will be portrayed in the movie, the rustic background of the image presents remote countryside.

Fans are blown away by Mandanna’s transformation for the film which is being shot in two parts. The first part titled Pushpa: The Rise will grace the screens on Christmas 2021.

Pushpa is co-produced by Mythri Movie Makers and Muttamsetty Media. The film is about a lorry driver who is involved in illegal smuggling of sandalwood. The film draws from the real-life incidents of the smugglers in Andhra Pradesh.

While the film will originally release in Telugu, it will have a simultaneous release of its dubbed versions in Malayalam, Tamil, Hindi, and Kannada languages.

Pushpa is a story based on real-life incidents about the red sandalwood smugglers in the Seshachalam hills of the Rayalseema region in Andhra Pradesh. Directed by Sukumar, Pushpa will see Allu Arjun playing the role of a sandalwood smuggler named Pushpa Raj.