Prem Chopra and wife Uma have tested positive for Covid-19. The couple is admitted to Mumbai’s Lilavati Hospital in Mumbai and here are updates about his health condition

As the B-Town scare is continuing amongst celebs, according to the latest reports, Prem Chopra and his wife Uma Chopra have tested positive. Also, Dr. Jalil Parkar who is reportedly taking care of Pre lm Chopra and his wife Uma Chopra has reported that both of them have received the monoclonal antibody cocktail treatment for Covid-19 and now they are recovering. The news is indeed saddening and fans have already showered their love on social media for the senior actor and his wife. 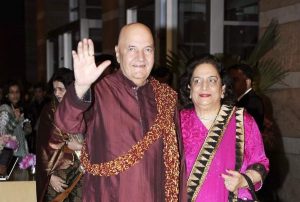 The veteran actor Prem Chopra had made his Bollywood debut in th le year 1960 with the film titled Mud Mud Ke Na Dekh. However, a Punjabi film titled Chaudhary Karnail is what got the actor fame and recognition in the Bollywood industry. Prem Chopra and Uma tied the knot in the year 1969 and she is reportedly a fashion designer.

We hope a good health update about Prem Chopra and his wife Uma coming to the limelight as soon as possible.

Meanwhile, other than hand, John Abraham and his wife Priya Runchal had recently contracted Covid-19 on January 3, 2022, and a few days back Nora Fatehi, Kareena Kapoor Khan, Arjun Kapoor, and many others had contracted the disease. As the Bollywood scare continues, we hope that the spread of the new disease Omicron also reduces as soon as possible. Also, many films have been postponed because of the rising cases so that congregation of people is avoided at all costs. All the celebs have urged their fans to keep their masks up and stay safe and healthy.