Pawandeep Rajan And Arunita Kanjilal Wedding: Indian Idol Fame Singers Tie The Knot; Their Pics Are Too Cute To Be Missed

As we all know, the wedding season is in full swing these days. Every now and then, there is news of celebrities and stars marrying. These celebrities got married in the same way that Rajkummar Rao and Patralekhaa, Anushka Ranjan and Aditya Seal, Vicky Kaushal, and Katrina Kaif did. Pawandeep Rajan and Arunita Kanjilal are also in roumers.

Both are excellent singers who rose to prominence on one of the singing reality shows, Indian Idol Season 12. Even though both of them have maintained silence about their relationship and have always claimed to be best friends, it appears that their fans have continued to pair them, and pictures of Pawandeep and Arunita getting married have gone viral on social media. In the image Pawandeep and Arunita appear to be a bride and groom, exuding a wedding vibe. 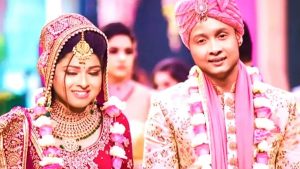 Pawandeep was born into a musical family; his father was a singer who used to perform at local functions and public events throughout the state of Uttarakhand. Pawandeep used to sing and play musical instruments at the college young fest. While he was performing all of this time, he was given the opportunity to appear on reality singing TV shows. He auditioned for The Voice Of India in 2015 and won the show. Later on, he was seen releasing his debut track Yakeen, among other songs. Apart from singing, Pawandeep is familiar with a variety of musical instruments, including the keyboard, drums, and guitar. On August 15, 2021, he was also declared the winner of Indian Idol 12.
(Also Read: O Saiyyoni Song Out: Himesh Reshammiya Brings Indian Idol Duo Pawandeep Rajan and Arunita Kanjilal Back Together)
Arunita Kanjilal is a semi-classical Indian singer who is from Kolkata. She has sung many Bengali and Hindi songs. She has also won the Bengali Sa Re Ga Ma Pa Bangla 2013 at the age of 10. She competed in one of the singing reality show Indian Idol 13 and Finished as the first runner-up of the show.