With tattoos many youngsters have started to express their thoughts with the help of their tattoos. Bollywood celebrities especially Star kids have been seen with them too

As tattoos are a form of expression for the youth now and Bollywood star kids are also matching up with the trend. Many popular stars are trying their hands-on tattoos which have some significance to their families or their lives. The beautiful tattoos have taken the internet by storm and their fans cannot wait to check out the meaning behind them. As we take a look at all the tattoos of these Bollywood stars let us also read about their meaning. 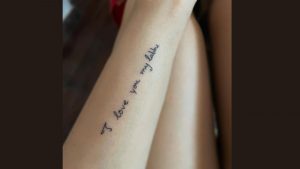 Janhvi Kapoor’s daughter of actress Sridevi Kapoor. Janhvi was also a very trendy star on social media before her debut. Janhvi’s mother Sridevi died at a relatives wedding in Dubai and the news was very shocking for Janhvi. Janhvi was away from her mother for her shooting and this hurt Janhvi because she didn’t see her mother for the last time. Very recently Janhvi Kapoor showed off her tattoo which read I love you my labor. This line was written in a letter to Janhvi by her which has an emotional connection.

Athiya Shetty is a Bollywood beauty and a star kid who is the daughter of actor Suniel Shetty. She debuted in Bollywood with the film, Hero but has failed to leave a spark with her acting skills. She is also friends with the American star, Drake, and was reportedly in a relationship with him. She is also a fan of tattoos and has an angel wings tattoo on her right-hand wrist.

Krishna Shroff is Jackie Shroff’s daughter and is also a producer. She has remained fit and lost a lot of weight. She has also shown her love for a toned body and tattoos. She has many tattoos from her waist to her thighs. They are really beautiful and look good on Krishna.

(Also Read: Janhvi Kapoor Shares Goofy-Yet-Memorable Moments From Her Vacation With The Dad; Photos Will Leave You Hooked)

Star Kids inspire many of us to do the same. Which tattoo was better for you?