Is Kanye West Trying To Maintain A Low Profile After The Chicago Birthday Debacle? THIS Picture Will Tell you – CHECK OUT

Kanye West surely knows how to attract the spotlight and always smack to the headlines. Recently the artist was spotted in a very different look and seems like he trying to maintain a low profile

Kanye West is a Hollywood figure who can’t seem to stay out of the news for his bizarre behavior and problems. The well-known rapper has been on the radar of the media, and he gives them plenty of reasons to be. The hip-hop artist. Kanye West was spotted out in Malibu on January 18th with some work colleagues, but his face was carefully hidden from view as he rocked an all-black appearance and masked his head from sight, following all of the Chicago’s birthday controversy and his new single about Pete.

The “Off the Grid” rapper sported a full clown mask covering his entire head for the outside discussion with a few others purportedly on his crew, maintaining a minimal presence from the crowd. He teamed it with a slouchy leather jacket and cinched black pants and rain boots. 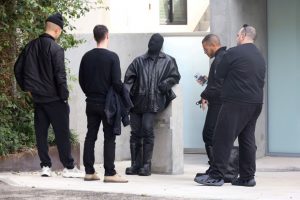 The avant-garde aesthetic, as bizarre it may appear to some, is emblematic of Ye, whose tight friendship with Balenciaga creative director Demna Gvasalia has culminated in incomparable selections in the previous year, and has definitely impacted his ex-wife, Kim Kardashian. For the 2021 Met Gala, the television personality dressed head-to-toe Balenciaga, with Demna in behind, who was also wearing a face covering, leading a few to presume it was Kanye who was accompanying Kim.

Some have speculated that Kim’s BDSM-inspired Balenciaga looks are more significant than previously thought concerning her ex-husband, although the verdict is still out on that. Could Kanye be concealing his figurative significance following the controversy surrounding his daughter Chicago’s fourth birthday celebration on January 15?

(Also Read: Finally, Pete Davidson Reacts On Kanye West’s Song About Beating His A*s; Find Out What Does He Have To Say)

When Kanye West asserted he hadn’t been given the location for the occasion, which was co-hosted with Kylie Jenner as a combined party for Stormi Webster, a source close to the Kardashian family specifically told a pioneering portal that Kim and Kanye’s co-parenting connection doesn’t have to include going to every solitary party together. His former wife, according to the source, did not invite him to join in the first place because he is no longer a family member.