Kashmera Shah and Kamya Punjabi laud Vishal Kotian for his commentary and straight from heart statements. Fans call him the most entertaining contestant of Bigg Boss 15

Big Brother is a show that brings people together. Whether it’s ordinary people or the greatest superstars, this programme never fails to delight. Recently, actor Vishal Kotian, who joined the programme, has received a lot of praise from the audience. Above all, he has received a great deal of praise from his colleagues in the industry.

Kashmera Shah and Kamya Punjabi were among those who had banded together to support Vishal Kotian. Vishal was seen providing live commentary on a fight between Pratik and Umar in a recent episode. Kamya said on her Twitter account that she was taking Pratik’s lesson and that she appreciated Vishal’s statement about the Tunda fight by writing ‘#VishalKotian that was too good.’ 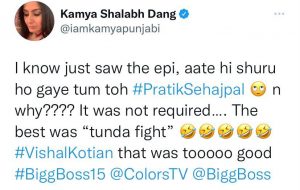 Kashmera, too, loved the recent episode and praised Vishal on Twitter, writing, ‘I like my #veeru. He had the audacity to admit that he would say the ones he disliked the most, and he finished by saying Good Job.

Vishal, the fans’ favourite and, more importantly, the industry’s favourite, is having the time of his life inside and is well on his way to winning people’s hearts! 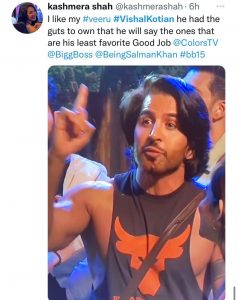 Bigg Boss 15 has only been underway for three days, but there has already been a lot of drama for the viewers. There are sixteen competitors, three of which are Bigg Boss OTT alumni: Pratik Sehajpal, Shamita Shetty, and Nishant Bhat.

Pratik and Jay Bhanushali got into a brutal brawl. Pratik had hidden a map of the home for the other participants to locate. He got into a furious dispute with Jay, who made fun of his height.

Karan Kundrra had to pull Pratik away from Jay’s collar when he touched it. Bigg Boss said that, as a result of Pratik’s behaviour, in which he ended up shattering a glass door in his rage, all competitors save Pratik, Shamita, and Nishant had been nominated.

Whom among the rest of the contestants if your most favourite? Share your thoughts with us in the comments section below.