Agga Bai Sasubai: Here’s What Soham Can Do To Make Amends With Asawari And Abhijit

Asawari’s emotional speech has left Soham in tears and it seems as if he has realized his mistakes. While she refuses to forgive him, here’s what he can do to seek her forgiveness.

In a recent episode of Agga Bai Sasubai, we saw a never-seen-before side of Soham. We saw him get emotional after hearing his beloved aai’s emotional speech. After Asawari won the cooking competition, she gave a heartfelt speech about love and how nothing matters to her more than her ‘family’, and that left Soham in tears. He seemed to have realized his mistake and approached Asawari. But before he could say anything, Asawari told him that she has ‘nothing left to give him, not even forgiveness’

Even though Soham has hurt Asawari a lot in the past, he deserves a second chance. Here is what we think he can do to seek Asawari’s forgiveness:

Soham can step down as the owner of Abhijit’s business and return it to the rightful owner. It was Soham’s deceitful behaviour that prompted Asawari to leave their home, so there’s a chance that she might consider forgiving him if he returns her husband’s restaurant.

2. Accept Abhijit as his stepfather

Soham has never wholeheartedly accepted Abhijit as his stepfather and has always tried to sabotage his mother’s marriage. This is one of the many reasons why Asawari and Soham are now living separately. If Soham comes to realize that Abhijit is indeed a good man and accepts him, then she may think about forgiving him.

If he truly wishes to seek Asawari’s forgiveness, then he must take some responsibility and become independent. Up until now, he would rely on Asawari for everything and even refused to complete his education. Soham needs to leave his nest and get a job. 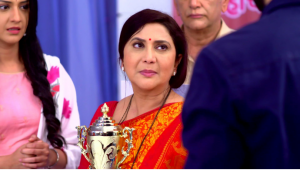 Of late, Soham has been treating his wife Shubhra miserably. He has even accused her of infidelity once. Asawari needs to see that Soham is a changed man and the best way to do that is by treating Shubhra with love and respect. She has been nothing but supportive and loyal, and deserves to be treated better.

Soham is the sole reason for the separation of his family. He needs to unite his family and take responsibility for his actions, only then can he expect Asawari to forgive him. If he really wants to make amends, then he must change as a person and right all his wrongdoings.