The versatile and A-lister television diva and also the Bigg Boss 14 winner, Rubina Dilaik has given her peace of mind to a fan page by making fun of them in her Instagram story because of this reason

One of the most loved and trailblazing tinsel town starlets who has been entertaining fans and audiences relentlessly for the past fifteen years right from the first hit show Choti Bahu and now has many hit shows like Shakti Astitva Ke Ehsaas Ki to her credits as an actor, she has made her fans and audiences fall in love with her again ever since winning the previous season of the controversial reality show Bigg Boss 14 and ever since that time, she has become an unstoppable force as she continuously is seen entertaining her fans and audiences with her strong acting prowess by giving them many hit music videos after the reality show got over and is also making her big Bollywood debut with singer Palash Mucchal’s directorial debut Ardh featuring many other actors in the film as well.

She is a very avid user of Instagram and is always connected with her fans and netizens as she keeps on sharing several stunning and fun dance reels on her Instagram account that end up going viral and shake the social media by storm as well.

Her fan clubs keep on sharing many impressive pictures of the diva on social media but recently one fan club which posted an edited picture of Rubina in her before and after looks, its editing didn’t settle down well with her and irked her a lot which is the reason why she posted the same picture on her Instagram story and also insulted that fan club a lot. 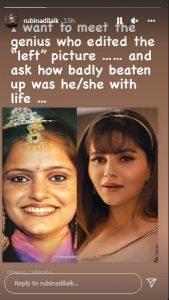 Taking to her Instagram handle, Rubina has posted this picture on her story and also publically called out that person and taken a sly dig for such horrible editing of her picture.

Sharing this edited picture her caption mentioned how she wants to meet this particular person that has edited the left side picture and ask how badly frustrated or fed up this individual was with his or her life. This picture had been shared a few days back and was a throwback pic of Rubina and it looks like she is very miffed with this edited picture.

(Also Read: Hina Khan And Shaheer Sheikh Spill The Beans On Their Adorable Camaraderie With Each Other)

Naagin 6 Promo Out: Mouni Roy, Nia Sharma, Or Rubina Dilaik; Who Is Going To Protect The Globe From A Deadly Virus? FIND OUT

Naagin 6 Promo Out: Mouni Roy, Nia Sharma, Or Rubina Dilaik; Who Is Going To Protect The Globe From A Deadly Virus? FIND OUT

Rubina Dilaik Raises Hot Couture In Her Latest Bold Outfit; Actress Aces Her Ensemble Which Will Make You Go Weak On Your Knees

Rubina Dilaik Raises Hot Couture In Her Latest Bold Outfit; Actress Aces Her Ensemble Which Will Make You Go Weak On Your Knees

Rubina Dilaik Tests Negative For Covid-19; Here’s How She Is Being Strong In The Face Of Adversity

Rubina Dilaik Tests Negative For Covid-19; Here’s How She Is Being Strong In The Face Of Adversity