OMG! What did Vishnu say on Prakash Raj panel resignations

On Monday, October 11, Prakash Raj tendered his departure from the Telugu cinema industry’s Movie Artists Association (MAA) after his loss in the MAA elections on Sunday, October 10. He has been running for President. Manchu Vishnu, the son of famous Tollywood actor Manchu Mohan Babu, has been chosen as President of the organization.

The nominations for the Movies Artistes Association, the Telugu film industry’s highest body, have concluded. On Monday, October 11, Prakash Raj announced his resignation from the Telugu cinema industry’s Movie Artists Association (MAA). Having followed his loss in the MAA elections on Sunday, October 10, he began campaigning for the position of President. 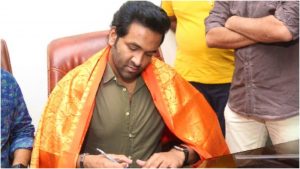 Hours after Manchu Vishnu beat Prakash Raj; he resigned from the MAA. Prakash Raj is a Karnataka immigrant who has primarily performed in Telugu films. He has been a member of MAA for the last 21 years.

Vishnu Manchu made several pledges during the presidential campaign, including employment security, medical insurance, and financial assistance to poor Telugu performers. However, the incoming President may have to deal with Prakash’s panel’s rush of resignation letters first.

Prakash Raj also sent Vishnu a note thanking him on his outstanding victory, informing him that he’ll be retiring from the organization, and requesting that he respect his choice. For the future, Vishnu captioned a screenshot of his text discussion with Prakash Raj on Twitter. Vishnu addressed Prakash Raj as “Dear Uncle” and thanked him in his response to his mail. He expressed his displeasure with his choice to retire, calling him an “integral member of our family.” He also stated that he would meet with him shortly to address the matter and encourage him to rush. Take a look at the following tweet!

For the future. We are one. Always. pic.twitter.com/1Frpl8VVpt

Meanwhile, Prakash Raj thanked his followers for their support in the wake of his recent comments. He also promised to explain why he and his colleagues resigned from the Movie Artists Association (MAA).

In this recent tweet, Manchu Vishnu announces his ascension to the presidency of the MAA. He requests good wishes and positive energy from his followers.

I have today assumed the office of the President of MAA! Need all your wishes and send me positivity as much as you can. #MAA pic.twitter.com/cYUiuxmwQ9

Prakash Raj assured the reporters that he would work with Telugu cinema industry directors, actors, and composers and that he was withdrawing from the organization.