When Salman Khan And Sangeeta Bijlani’s Wedding Was Called Off Last Minute; Here’s Why

After dating for almost a decade, Salman Khan and Sangeeta Bijlani’s wedding was called off when even the invites were ready to be sent! Sangeeta Bijlani dated him for over a decade

Actor Salman Khan’s love life has always been a topic of discussion due to the actor not being married despite his age. In his most famous relationship, Sangeeta Bijlani dated him for over a decade. The two of them were madly in love and they were about to get married, but they called off the wedding.

The reason being when the actress claimed to have ‘caught’ him. They went their separate ways but still managed to stay on friendly terms with each other. Sangeeta is seen at all the festivals and celebrations at Salman’s house. 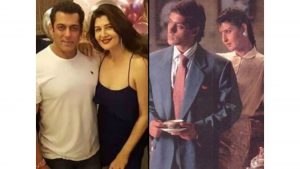 While appearing on a popular talk show, Salman Khan shared how he wanted to get married to the actress and how things didn’t work out at that point. When he was asked why his wedding with Sangeeta was being called off, the actor evaded the questions and agreed that he did get caught and that he always gets caught because he is stupid!

When Sangeeta was asked about her friendly relations after the break-up with Salman in an interview, she had said that connections always remain and do not break, and the love partners and school friends never disappear.

She also added that no one is permanent in life, as people come and go and that there is nothing to feel bitter or angry. She concluded by saying that life is full of experiences, and we couldn’t agree more.

Since her debut in 1987 with Aditya Pancholi, she did many films like Jurm and Hathyar; the actress now aims to make a comeback through web series.

As for Salman, he was last seen on the screens in Radhe: Your Most Wanted Bhai.