Priyanka Chopra Jonas took time off and went for a scuba diving session on Sunday. She shared glimpses of her watery Sunday on her social media account. Parineeti Chopra dropped a comment for sister on the post

Priyanka Chopra Jonas is like the fairy on the land. She never leaves stones unturned when it comes to impressing her fans. Priyanka has got a widespread fanbase who shower her with love and praise. PeeCee often takes to her social media accounts and drops several photos and videos of herself. The actress took to her social media account and shared a glimpse of her Sunday.

Priyanka Chopra Jonas took to her Instagram account and shared a video of her scuba diving session that she had on Sunday. She is currently in the United Kingdom for the shooting of her upcoming film Citadel. The busy actress took some time off from her busy schedules and went scuba diving with her crew in the blue waters of Spain. PeeCee shared a series of photos and videos on her Instagram account. She captioned her post as “There are days when the stress just needs to be silenced! What better way to do that than to explore the glorious underwater creations of God. I was very honoured that the camera crew from Citadel let me crash their party! Big shoutout to the @alisubbuceo team. Penélope, Victor, Alejandro and everyone else, thank you for such a magical experience. I really needed it!! Thank you @tsigel for taking us out! So fun hanging with Sam, Paul, Josh ,Tobias, Andy, Christina and Victor. Sunday well done! PS: @franklinjonas so happy you’re here!”

Along with her social media post, PeeCee shared a couple of photos and videos from the scuba diving session on her Instagram stories too. It looks like the actress had a gala time beneath the water. In one of the photos, she can be seen laughing wholeheartedly. Alongside the million-dollar photo, she wrote, “A much-needed day in the ocean.” 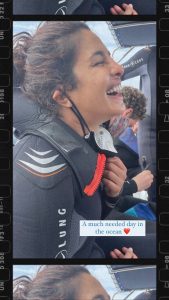 As soon as Priyanka Chopra Jonas dropped the photos and videos from her scuba diving session, her sister Parineeti Chopra dropped a comment in her post. She wrote, “Yayyy. So happy you’re joining the wild side.” For an unversed, Parineeti Chopra also went scuba diving a couple of days back and enjoyed in the water.

Priyanka Chopra Jonas often takes time off from her busy shoot schedule. A few days ago, the actress took to her social media account and uploaded a photo from the streets of Spain. Along with the photo, Priyanka wrote a thoughtful caption. She also shared photos from the sightseeing session with her mom. PeeCee and her mom can be seen posing in the beautiful streets of Spain.

Meanwhile, on the work front, Priyanka Chopra Jonas will be next seen in The Matrix Resurrections alongside Keanu Reeves. She also has Citadel in her kitty. Apart from this, Priyanka will feature in Farhan Akhtar’s Jee Le Zaraa alongside Katrina Kaif and Alia Bhatt.