Parineeti Chopra Along With Brother Shivang Chopra Croon Kalank Title Track Leaving All Of Us Awestruck; You Cannot Miss Their Sync

Chopra siblings- Parineeti and Shivang crooned Kalank title track. Ayushmann Khurrana, Varun Dhawan, and others are all praises for their perfectly synced voices and melodious performance

Parineeti Chopra is currently in the Maldives and enjoying her time at the beach and the warmth of the sun. The actress also shared snippets from her time on the gram and the fans seem to be enjoying this virtual tour. Her brother Shivang Chopra had also accompanied her and the two jammed together singing the title track of Kalank together. This version is just a pure treat as it’s their original voices without any edits or voice corrections. The internet is all hearts.

Parineeti also revealed in the caption that the sibling duo has been singing together since they were 8. They even went to music school to learn together. Now, they can predict each other’s moves while singing. In the video, Parineeti Chopra and Shivang Chopra are also seen twinning with their white fits.

You can check out the video here:

After hearing this soulful version, Ayushmann Khurrana, Amaal Malik, Varun Dhawan, Saina Nehwal were all praises and shared it on their social media too. 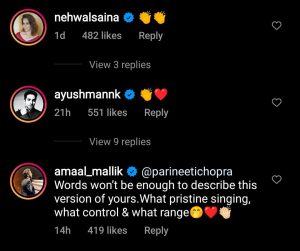 Parineeti Chopra is one of the very few actors who can act and sing very beautifully she also released her third song in 2021 and the audience loved her voice. Her single was titled Matlabi yariyan unplugged, which features in her forthcoming film The Girl On The Train. She feels privileged to be an actress who she can sing.

This was indeed a beautiful version of the track, what are your thoughts?