8 Onscreen Detectives Like Agent Raghav, Abhay And Others Who Can Give Sherlock Holmes A Run For His Money

Code M, Churails, and other shows and movies on ZEE5 that feature mystery-solving detrectives like Sherlock Holmes.

Are you a fan of Sherlock Holmes and love watching movies and shows about characters who solve complicated mysteries and crimes? If yes, we’ve got your binge-watching list covered. These Hindi shows and movies on ZEE5 revolve around some crime and mystery solvers, just like Sherlock Holmes, and make for a fun and engaging watch.

Agent Raghav, starring Sharad Kelkar in the title role, is a show about Raghav Sinha, who joins the Crime Branch to solve the most intricate mysteries. Raghav is the son of a psychiatrist, and from his father, he has learnt the science of reading a person’s body language. Besides having a high IQ, Raghav possesses extraordinary skills in observation and deduction. With these skills, his feats of crime-solving make the show super-enjoyable to watch.

Code M is a show that revolves around the murder of an army officer, which hints at a bigger conspiracy. To solve the murder case, the military appoints Major Monica Mehra (Jennifer Winget), to investigate independently. Major Monica uses her brilliance to investigate the case and interrogate the suspects and witnesses to solve this case. She also joins hands with Legal Counsel Angad Sandhu (Tanuj Virwani) to find out the truth.

Abhay on ZEE5 is a crime thriller show, starring Kunal Kemmu in the title role. Abhay is a fearless and stern cop, who possesses elite deduction skills, with which he solves the crime. However, his USP is that he has the thinking skills of a criminal – he can think like a criminal and can risk it all to solve a case, which makes him one of the best mystery-solvers.

Detective Didi is a TV mini-series that aired on Zee TV in December 2017. The show stars Sonia Balani as Bunty Sharma, aka Detective Didi, who solves cases for a living. Her expertise in case solving ranges from busting of simple extramarital affairs to dealing with severe crimes of kidnapping and child trafficking.

Samrat & Co. is a crime thriller film, starring Rajeev Khandelwal and Gopal Datt. Rajeev Khandelwal stars as Samrat Tilakdhari, a private detective, who runs his detective agency with his assistant Chakradhar Pandey (Gopal Datt). The duo uses their genius of solving mysteries to find out about mysterious happenings in a girl’s life. Soon, they come across a murder case that is linked to her.

Churails is a unique detective series, starring Sarwat Gilani, Mehar Bano, Nimra Bucha, and Yasra Rizvi. The show revolves around the lives of four women, who belong to different professions and backgrounds and come together to secretly open a detective agency that catches cheating husbands. They run this agency in the guise of a burkha store. However, one of their investigations pits them up against one of the most powerful men of their city. In this case, you had as many as four Sherlock Holmes coming together.

Suraj Pe Mangal Bhari is a rom-com film starring Manoj Bajpayee, Diljit Dosanjh, and Fatima Sana Sheikh. The film stars Manoj Bajpayee as a detective, Detective Madhoo Mangal Rane. He spies on ‘eligible’ bachelors and ruins their weddings by revealing secrets about their misdeeds to the bride’s family. When one of these bachelors, Suraj (Diljit Dosanjh), gets enraged at Madhoo Mangal Rane for foiling his wedding plans, he vows revenge against the detective. 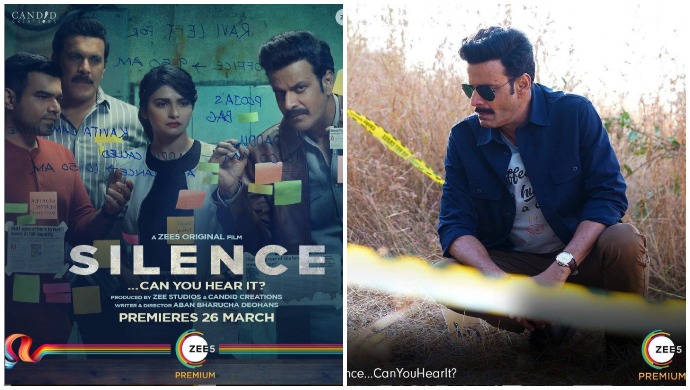 Silence is an upcoming murder mystery film, starring Manoj Bajpayee, Prachi Desai, and Arjun Mathur. The film will revolve around a team of four cops led by ACP Avinash (Manoj Bajpayee), who are tasked with solving an extremely difficult murder case.

Silence premieres on ZEE5 on 26 March.

Kapil Sharma, Divyanka Tripathi, Jennifer Winget- 6 Celebrities Who Charge The Most For Each Episode

Kapil Sharma, Divyanka Tripathi, Jennifer Winget- 6 Celebrities Who Charge The Most For Each Episode

15 Easy-Breezy Dresses We Want To Steal From TV Celebs This Summer!

15 Easy-Breezy Dresses We Want To Steal From TV Celebs This Summer!

Why We Believe Jennifer Winget Is The Jennifer Aniston Of The Indian TV!

Why We Believe Jennifer Winget Is The Jennifer Aniston Of The Indian TV!

13 Actresses We Salute For Standing Their Ground And Breaking Barriers This Women’s Day!

13 Actresses We Salute For Standing Their Ground And Breaking Barriers This Women’s Day!

Best Of 2020: 30 Sexy Celebrity Pictures That Set The Internet On Fire This Year

Best Of 2020: 30 Sexy Celebrity Pictures That Set The Internet On Fire This Year