Yami Gautam has back-to-back releases, and she needs all the blessings. She visits temples to ask for blessings. The actress got married to filmmaker Aditya Dhar in a hush hush wedding

A lot of actors visit temples and dargahs before the release of their films. Yami Gautam too visits temples dressed like a newlywed woman. Yami Gautam is going places! She has been receiving praises for her performance in her recent film, and the actress has recently completed the shooting schedule for her next film, LOST. Yami plays an exciting role of a crime reporter in the investigative drama. The film was being shot in Kolkata. That’s not all; Yami also has many back-to-back releases this year.

Yami took some time off post the shoot to seek blessings and offer her prayers at the Dakshineswar and Kali Bari Temple in Kolkata. According to a source, Yami believes a lot in visiting temples and also in Shakti Peeth. She always manages to take time off her work to pray even when she is very busy. 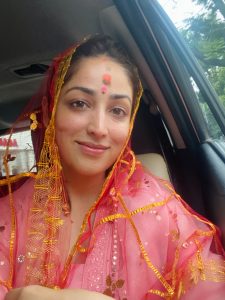 She visited the two temples early morning dressed like a newlywed bride and looked every bit the Kashmiri woman wearing the dejhor, a dangling ear ornament worn by married Kashmiri women. She is seen sitting in a car post the temple visit with the seat belt securely across her. She looks gorgeous in a kurta and green dupatta with red tilak on her forehead.

Yami has eight back-to-back releases lined up this year. While she has completed shooting for films like A Thursday, LOST, and Dasvi, she is yet to complete her work on OMG2, Chor Nikal Ke Bhaga, and Dhoom Dhaam.

Marriage seems to be suiting Yami, as she is glowing and looks extremely happy. The glow on her face could also be because of the volume of work she has! Whatever it is, we aren’t complaining and wish her more success!