Bollywood’s ‘dada’ Jackie Shroff comes among one of the superstars in the Bollywood industry. Recently Jackie’s daughter Krishna Shroff says, ”I am here because of my brother Tiger Shroff and also the reason I am pursuing my career.” Superstar Jackie Shroff says, he is very proud of their children. While his son, Tiger Shroff, is making his career for himself by taking forward his dad’s acting legacy in Bollywood on the other hand, his daughter Krishna Shroff is making a path of her own in the fitness field. In an interview, Jackie said that for him there’s no greater joy more than to be recognized as the dad of Tiger and Krishna.

Even the sibling Tiger and Krishna are quite attached to each other. They have always supported each other as per their work or talent, whether it comes to fitness or future advice. There is hardly any sibling duo in the Bollywood industry that can match up to them. This duo even owns a gym by themselves in Bandra west named MMA Matrix Fitness Center. 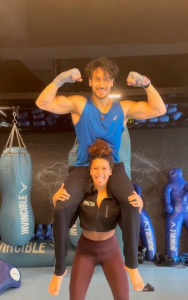 Krishna Shroff says, “Everyone knows that he is the king of fitness and there is no way I can dethrone him when it comes to that”. Tiger also shares his up-to-date routine on social media for his fans. Now looking at the fitness thing question is that whether Tiger has inspired her sister or Krishna has motivated Tiger to earn that physique.

Clearing the question, Krishna states that it’s her brother’s love and support that has helped her make her own way in an industry by backing her where everyone expected her to follow her dad’s path into films. Krishna Shroff said that she and Tiger are highly competitive but she will always give him that he has been 100 percent of her motivation and her inspiration. She also called Tiger a supportive older brother who has always assisted her and encouraged her. She further added saying that Tiger is the main reason that she’s able to pursue her passion and is able to do what she loves every single day.